The North Atlantic Treaty Organisation (NATO) is a military alliance set up after WW2. During the Cold War it was balanced by the Warsaw Pact. Since then it has expanded its reach, even though Mikhail Gorbachev clarified in 2014 that while discussing the unification of Germany, it was highly requested to not be deployed on former East German soil.[1]

In the 2010s during Cold War 2.0, studies have shown the population of the NATO members and bordering countries increasingly look negatively at NATO.[2]

On 6 October 2017, when it was announced that the International Campaign to Abolish Nuclear Weapons (ICAN) had won the 2017 Nobel Peace Prize, NATO Secretary-General Jens Stoltenberg denounced the Nuclear Weapon Ban Treaty, the accord promoted by ICAN aimed at eliminating all nuclear weapons:

"NATO is committed to preserving peace and creating the conditions for a world without nuclear weapons,” Stoltenberg said. “We share this goal with ICAN and I welcome the attention given to this issue by the Nobel Committee. However, the NWBT does not move us closer to the goal of a world without nuclear weapons. In fact, it risks undermining the progress we have made over the years in disarmament and non-proliferation.”

"What we need is verifiable and balanced reduction of nuclear weapons,” Stoltenberg said. “The Nuclear Non-Proliferation Treaty, which all NATO Allies have signed, remains the cornerstone of international efforts to do so. Since the end of the Cold War, NATO Allies have dramatically reduced the number of their nuclear weapons. But as long as nuclear weapons exist, NATO will remain a nuclear alliance.”[3]

NATO's original justification and cold war official narrative about "defending the free world against communist aggression", while mendacious from the outset, was a lot clearer than the current position. Since 9/11 particularly, the fallback justifications for war have been "humanitarian intervention" (aimed at the political Left) and fighting 'terrorism' and its 'state sponsors' (aimed at the political Right), both of which are wearing increasingly thin. Some NATO activities, such as Operation Gladio in particular, were never intended to come to light, and have incoherent and/or self-contradictory official narratives - indicative of the strong support given by commercially-controlled media.

NATO was set up after World War II. The Soviet Union applied for membership in 1954, but was refused.

In October 1990, Le Cercle member and Italian Prime Minister, Giulio Andreotti, accused NATO of involvement in Operation Gladio. After almost a month of silence on the matter, senior NATO spokesman Jean Marcotta categorically denied Andreotti's allegation, stating at SHAPE headquarters in Mons, Belgium that "NATO has never contemplated guerrilla war or clandestine operations; it has always concerned itself with military affairs and the defence of allied frontiers." The next day a different NATO spokesman retracted NATO's denial.[4] Although established at or very near the start of NATO, it only emerged to become part of the historical record in 1990 after an investigation in the Italian parliament - by which point it had already lead to many violent deaths of civilians in false flag operations in a range of European countries.

The post 1989 decline of the Soviet empire and consequent lack of a clear enemy caused something of an existential crisis for NATO, which appears to have lead directly to the "war on terrorism" through the Operation Gladio/B plan. Some concessions and significant promises regarding NATO expansions towards Russia were not adhered to.[5]

In 2022, Russian president Putin tried to halt the expansion of NATO by placing 100.000 troops at their Ukrainian border, reminding the US of Gorbachev's request. Putin demanded the US to cease all NATO activity in every country joined since 1997.[6]

NATO has an extensive civilian structure, under the Secretary General of NATO, as distinct from its military structure, commanded by the Supreme Allied Commander Europe.

The SACEUR (Supreme Allied Commander Europe), NATO's top military executive, is always an American. As of 2015 NATO's SACEUR is Philip M. Breedlove[7]. Every NATO member has its own ambassador. According to Daniele Ganser "these channels function like this: NATO - and here predominantly the USA - says 'here are the facts and you have to do that'."[8].

The Secretary General of NATO has no power in the military command structure, but chairs several of the senior decision-making bodies of NATO, including the North Atlantic Council, the Defence Planning Committee and the Nuclear Planning Committee, the Euro-Atlantic Partnership Council, the Mediterranean Cooperation Group and serves as co-chair of the Permanent Joint Council and the NATO-Ukraine Commission. No publicly acknowledged selection procedure exists for this position; since the Bilderberg group arranged to reorganise NATO in 1966[9], all permanent holders of this position have been prior attendees of this conference.[10] 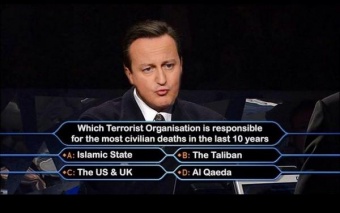 NATOs military activities provide not only huge profits for the military industrial complex but also provide a cover for other business such as the organising of deep events.

Since just after World War II, NATO established a network of terrorist cells. Officially for use in case of a communist invasion, this has increasingly been used for a range of purposes, such as promoting the strategy of tension through false flag attacks, possibly also for political assassinations, and in the 21st century especially, for promoting the "War on Terror".

It is possible that senior figures in NATO are involved in the global drug trade. Circumstantial evidence surfaced in 2003 with the arrest of Willem Matser,[11] a senior advisor to the NATO Secretary General, George Robertson, whom he saw on a daily basis. Matser was charged with money laundering, along with Pietro Fedino, an Italian crime boss connected to the Columbian Cali cartel. The failure of the commercially-controlled media to report any follow ups on this story supports the conjecture that this was no isolated enterprise, but part of a plan under deep state control.

The 1949 NATO pact, Article 5, states that an armed attack against one or more of them...shall be considered an attack against them all.[12] NATO invoked this article for the first time in its history on September 11th, 2001 when the U.S. claimed to be under military attack and called the other NATO members to assist its self-defence. NATO's treaty requires that the other members investigate the truth of this claim.[13] As of 2016 it is unclear:

While Article V (collective defense) protections only extend to actual NATO members, the Charter's Article IV allows the umbrella of NATO protection to be extended to those non-NATO members whom the alliance views as an ally - for example the Ukraine. NATO's military interventions against Serbia in 1999, Afghanistan in 2001, Iraq in 2004, and Libya in 2011, were all done under Article IV[14] of the NATO Charter. Seen in this light, the premise that NATO is an exclusively defensive organization, committed to the promise of collective self-defense, is baseless.[15]

The argument that NATO is merely for defence has drawn criticism, in particular in their role in the encirclement of Russia.

“We had a moment in history, between 1988 and 1991, where we could have worked with Mikhail Gorbachev to make his vision of perestroika succeed. Instead, we allowed him to fail, without any real plan on how we would live with what emerged from the ruins of the Soviet Union. Save for a short period of time during the Second World War where we needed the Soviet Union to defeat Germany and Japan, we have been in a continual state of political conflict with the Soviet Union. Even after the Soviet Union collapsed, we viewed the Russian Federation more as a defeated enemy that we needed to keep down, than a friend in need of a helping hand up.”
Scott Ritter (2021)  What Are The Prospects For Peace? [16]

The wisdom of NATO's leaders may be questioned by Western commercially-controlled media, but their good intentions are not. Following the "humanitarian intervention" in Libya. One critic asked the rhetorical question "When was the last time that any war, anywhere, amounted to anything more than a swindle for the benefit of the bankers and the war industry, or anything less than a bloodbath for the average man or woman in the target country?"[17]

In 2019, Emmanuel Macron was quoted as saying that "What we are currently experiencing is the brain death of NATO".[18]