From Wikispooks
(Redirected from Putin)
Jump to navigation Jump to search

Vladimir Vladimirovich Putin has been the President of Russia since 7 May 2012, a job he had from 2000 to 2008, and as Prime Minister from 1999 to 2000 and again from 2008 to 2012. Before becoming Prime Minister, he was head of the FSB at the time of the 1999 Russian Apartment bombings.[1] The panic in Russia surrounding this Russian 9-11[2] propelled Putin into power as President of Russia. He had previously worked as a KGB agent since 1975. Klaus Schwab has boasted of Putin's inclusion in the WEF Global Leaders for Tomorrow deep state recruitment network.[3] In March 2022, Klaus Schwab announced WEF had severed all ties with Putin and removed his listing and page from their website.[4]

As head of the Committee for External Relations for his mentor and mayor of St. Petersburg Anatoly Sobchak, Putin faced a corruption scandal, for which he - going against the city legislative council recommendation - was not fired, as Sobchak stopped the investigation.[5] Putin was accused in 1991 of exporting rare metals, oil products, and other raw materials for over $100m, after which the companies that agreed to barter contracts would have given food to the city in return, which did not happen.[6]

For 16 years Putin served as an officer in the KGB, rising to the rank of Lieutenant Colonel before he moved into politics, in his native Saint Petersburg in 1991. He moved to Moscow in 1996 and joined President Boris Yeltsin's administration where he rose quickly, becoming Acting President on 31 December 1999 when Yeltsin resigned unexpectedly.

Putin stepped in during a time where Boris Yeltsin according to ISGP was encircled or working with Peterson Institute directors, and well-connected deep state actors Peter Peterson and Larry Summers alongside a Zionist influence.[7] Putin called the clan "clandestine CIA officers" and quickly replaced them with 3 deep state factions: The Siloviki - A Russian term for the intelligence and army community with many angry elements because of the Soviet Union's downfall; Oligarchs that were paid off and forced to stay out of politics in exchange for no meddling in ethical affairs; and nationalistic scholars and personal friends that could function as deep state functionaries from Putin's time in St. Petersburg.[8]

“Putin is a modern KGB/FSB elitist who has subdued the oligarchs and think tank elite. His power comes from the FSB old boys and the oil, gas, media and defense corporations he has taken control of.”
Joël van der Reijden (2005)  [9]

ISGP names Putin as the #1 in Russia on his superclass index of most influential deep state operatives. Putin mostly controls the Russian Deep State and biggest Russian companies through appointing the directors at the most important businesses. These include, Menatep Bank, Gazprom, FGC UES, Rosneft, Nornickel and the GRU-linked Far West. Interestingly, Far West had investments and links to Soros, Adnan Khashoggi, Al Qaeda, Halliburton, facing scrutiny from the CIA and the Mossad, according to Peter Dale Scott.[10] Brendon O'Connell suggests Putin acts in consultation with "Kissinger and associates" as referenced in a 2009 New American article[11].

A 2010 cable from the U.S. Embassy in Paris said former US Defense Secretary Robert Gates called Putin a "leader plagued by an unmanageable bureaucracy and grappling with ruling a “virtual mafia state” dominated by corrupt businessmen and the security forces." Putin was believed to have less power than his alpha-dog image would suggest, as he was balancing dozens of corrupt special interest groups in a form of crony capitalism.[12] Putin responded that "The diplomatic service should be more careful with its documents", and upset that he was called "Batman to Dmitry Medvedev's Robin"-act.

On 21 January 2016, a long-awaited UK report into the death of ex-Russian spy Alexander Litvinenko [13] found two Russian men - Andrei Lugovoi and Dmitry Kovtun - deliberately poisoned 44-year-old Litvinenko in London in 2006 by putting the radioactive substance polonium-210 into his drink. It suggested this was probably done on the orders of the FSB with the knowledge and approval of the Russian President.[14]

“His unpredictability is not related to him exclusively, it is also related to a very strong opposition within the country. They are stopping him from delivering almost any of his election platforms and plans. As soon as he makes a decision on migrants, a court blocks it straight-away. It happens all the time. So, it is wrong to say that his unpredictability depends only on him. No, it depends on the entire American political system.”
Vladimir Putin (July 2018)  [16]

In 2011, at the Seliger 2011 youth forum, Putin replied to an audience question that "This is complete nonsense, it is impossible... To imagine that US intelligence services did it deliberately, with their own hands, is complete nonsense... Only people who do not understand the workings of security agencies can say that. It would be impossible to conceal it.”[17]

A good reason why Putin doesn't dare to question the official narrative of 9-11 could be found in the answer of the consequences if the public found out who was behind the 1999 Russian Apartment bombings,[18] where on 22 September 1999, after several bombings had already killed over 290 people, a bomb was found and defused in the Russian city of Ryazan. Two days later Federal Security Service (FSS) Director Nikolai Patrushev announced that the Ryazan incident had been a "training exercise", although local FSB denied all knowledge. Alexander Litvinenko, Boris Berezovsky and Edward Jay Epstein have cited this as evidence that the FSB were responsible for the bombings. The Ryazan Incident marked the end of the bombings. [19]

Putin won the subsequent 2000 presidential election and was re-elected in 2004.

Because of constitutionally mandated term limits, Putin was ineligible to run for a third consecutive presidential term in 2008. Dmitry Medvedev won the 2008 presidential election and appointed Putin as Prime Minister beginning a period of so-called "tandemocracy".[20] In September 2011, following a change in the law extending the presidential term from four years to six,[21] Putin announced that he would seek a third, non-consecutive term as President in the 2012 presidential election, an announcement which led to protests in many Russian cities. He won the election in March 2012 and subsequent ones.[22][23]

Putin during his second term became increasingly known for his PR-Stunts painting him as hero of the common man. Examples are his large scale live interviews – often streamed live by the CCM[24] - with citizens[25], having a team of dozens of civil servants immediately[26] seeming to act on the often benign bureaucratic issue of the citizen calling in[27]. Also, part of this trend was, him being filmed half-naked horse-riding, doing judo, flying a jet fighter[28] or going to state-companies threatening to fire directors and ministers if they don't end strikes of the staff on the spot[29]. Putin often used Russian prison slang during these events where he talks about Western politics, seemingly trying to engage the Russian lower class to support him.[30]

“Speaking on TV at the beginning of Second Chechen War, which Russian authorities viewed as a counter-terrorist operation, he declared that authorities would pursue terrorists everywhere: “If they are in the airport, we will pursue them in the airport. And if we capture them in the toilet, then we will waste them in the outhouse.””
Vladimir Putin (2021)  [31]

This also includes the use of quotes from famous Russian poets and movies in nonsensical situations. When Putin was asked in 2021 whether he was “waging a cyberwar against America,” by Keir Simmons of the NBC, he answered that there has been no proof of Russian involvement and "Without evidence, you can take your complaint to the International League of Sexual Reform."[32]

"We now need the FULL picture on Russian interference - from murder on the streets to meddling in votes. 'Eternal vigilance is the price of liberty’. That means it's time for eyes wide open. Our investigating authorities have done their job in identifying the Salisbury assassins, now we need a Mueller-style probe into Russian interference in our democracy."[33]

“Digital giants have been playing an increasingly significant role in wider society, in certain areas they are competing with states … Here is the question, how well does this monopolism correlate with the public interest? Where is the distinction between successful global businesses, sought-after services and big data consolidation on the one hand, and the efforts to rule society[…] by substituting legitimate democratic institutions, by restricting the natural right for people to decide how to live and what view to express freely on the other hand?”
Vladimir Putin (2021)  [34] 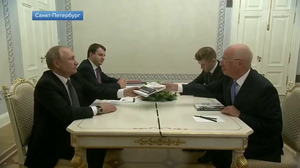 In August 2014, Professor Cees Hamelink wrote to Putin apologizing on behalf of the Netherlands government and media for the way "the facts concerning MH17, Syria and Ukraine are twisted to defame you and your country."[35][36]

“Whoever would try to stop us and further create threats to our country, to our people, should know that Russia’s response will be immediate and lead you to such consequences that you have never faced in your history. We are ready for any outcome.”
Vladimir Putin,  ThePrint (21 February 2022)  [37]

On 6 June 2013, Vladimir Putin and Lyudmila Putina publicly announced the termination of their marriage after 30 years.[38]

An appointment by Vladimir Putin