The 2015 Hawija Bombing on the 3rd June 2015 was a bombing of an IED-factory in the town of Hawija in Iraq by the Dutch Air Force during the war on terror against IS. US CENTCOM requested the Dutch MOD to strike an IED-factory. The six precision-strikes triggered secondary explosions of the factory that killed at least 70 people[1], with multiple sources reporting up to 170.[2][3][4]

Reuters and Al Jazeera[5] reported an air strike killed 70 people "including tens of civilians" on the 3rd and 4th of June 2015.[6]

US Lt. Gen. John Hesterman told a group of journalists in the Pentagon over a mobile connection on the 5th of June that "after a very disciplined targeting process, we dropped a fairly small weapon on a known IED building in an industrial area. The secondary explosion, which was caused from a massive amount of Daesh high explosives, was very large, and it destroyed much of that industrial area". And "no evidence of civilian casualties". A press release by the Pentagon revealed the strike had "inconclusive results".[7][8]

Three Dutch ministries, including the Dutch Ministry of Defence reported "No proof of Dutch involvement of civilian deaths in Iraq" on the 24th of June. The Secretary of defence announced in 2018 the standard prosecutor for military enquiries was looking into multiple incidents of civilian deaths caused by Dutch military action in Syria and Iraq in classified investigations in 2018, but did not mention names.

After CENTCOM in Qatar got intel from multiple Iraqi and US informants of an operational IED-factory, Iraq ordered an air-strike on it the same day. The US Air Force had multiple drones flying over the city and assessed the strike would result in civilian casualties. Citing agreement in the international coalition to "not attack targets that could result in at least 1 civilian casualty" they denied the request.[9] The Dutch Air Force decided to attack by midnight the next day as no civilian activity was seen. After a recon jet-fighter flew directly over the factory - triggering dozens of people to run out on the street - a second jet fighter dropped precision-bombs (up to 6), triggering multiple massive explosions of the factory.[10]

After interviewing military and civilian sources in the US, Iraq and The Hague and a joint Dutch and US FOIA request, newspaper NRC and public broadcaster NOS released an article and appeared on current affairs program Nieuwsuur[11][12] on the 18th of October 2019 revealing the communication between the Pentagon, the Dutch operational air force base in Jordan, CENTCOM HQ in Qatar and The Hague. NRC revealed that The Pentagon released a document showing CENTCOM had provided the Dutch MOD with a summary on the 15th of June 2015, assessing it "credible" that at least 70 people were dead, mentioning 22 women and 26 children.[13] 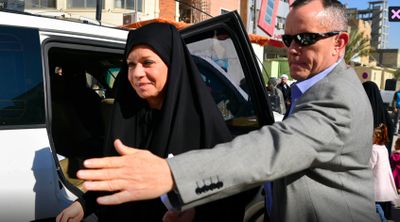 After lying about a bombing killing Iraqi's, Hennis is now working for the UN and UNAMI in... Iraq. Not completely related, but ironically nonetheless, Iraqis started a twitter campaign to expel her from the country.[14]

Dutch officers in Jordan and monitoring MOD officers in The Hague already informed the Secretary of Defense following the strike on the 3th and 4th of June "with the report of plausible civilian casualties", and continued to confirm it on 4 different occasions. Airwars and the Red Cross reported in August 2015 that the strike killed 70 to 170 people[15][16]. Defence Secretary Jeanine Hennis informed Foreign Affairs minister Bert Koenders and Prime-Minister Mark Rutte in June, but both had no memory of the conversation taking place in 2018. Hennis lied on two occasions in 2015 to MPs of Dutch parliament that there was no Dutch involvement of a bombardment in Iraq with multiple deaths.

Colonel Sean Ryan of CENTCOM in Baghdad clarified to Dutch media that their information regarding the number of casualties in this strike was not based on media-reports, but an intensive network of informants and data, and that the US already acknowledged the civilian casualties starting in 2017.[17] NRC was additionally informed in 2018 by American weapon-experts that the wording of Hesterman indicated the used bomb: The Boeing GBU-39. This model was in fact only available to two countries in the coaltion at that time: The US and the Netherlands, meaning the Dutch cabinet could've known in multiple ways from 2017 they were responsible. Airwars filed their own FOIA request and revealed another ally had "refused the same strike", noting the factory to be "the biggest known in IS history".[18] The NOS quoted the director of the Hawija Hospital in 2019 who estimated "at least 200 deaths" remarking a lot of refugees were never salvaged.[19][20] 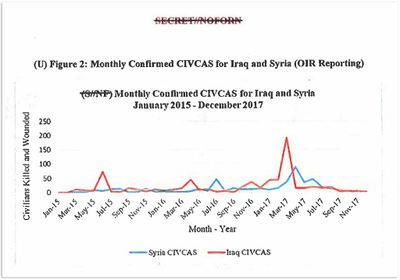 The Dutch are already confirmed champion of causing civilian casualties over 2015. So what are they hiding here?[21]

NRC revealed the Public Prosecution Service met some unusual behaviour in their initial investigation citing "not one response from US personnel about the event", with the US Department of Defense remarking "nobody is being prosecuted, so there is no treaty requiring us to", "waiting 15 months before questioning military personnel, a violation of EU Law for which the European Court of Human Rights already had sentenced the Dutch guilty before in the War in Iraq and a partly classified "discussion over the juridical consequences for future operations", as the Department of Defense had seemingly violated International humanitarian law, and their own legal guidelines.

The results were not released until 2018 in a small section of a progress report by the 3 Dutch Ministries regarding foreign counter-terrorism noting civilian casualties to be "very likely" on the 13th of April 2018. The Director of Plans of the Dutch Air Force Andre Steur rejected the accuracy of the report on commercially-controlled media saying "all our deaths were IS-fighters."[22][23][24]

In an interview with the NRC new Dutch Secretary of Defence Ank Bijleveld denied the officers had accepted civilian casualties with the remark "We always calculate them. The Americans do that differently".[25]. She informed the Dutch House of Commons that they could not "differentiate between IS and civilians in multiple instances that were under investigation by the Public Prosecution Service" in a letter to Dutch Parliament the 4th of November 2019, the same letter also explained the Dutch "didn't have their own intel" and blamed "wrong US intelligence and software" telling Dutch officers "no civilians lived in the neighborhood[26][27]" even though US and Iraq had a combination of surveillance in and above the city[28] - with drones and local informants - of which at least one reported "refugees living around the facility in the neighborhood.[29] 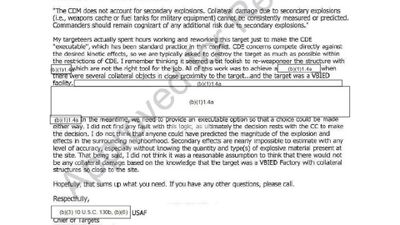 Apart from the contradiction on why make such a hard to sign off target "executable" if the dangers of civilian casualties were that high, the Chef Of Targets of the USAF admitted it would be "not reasonable" to deny the possibility of collateral as the plant was in way too close proximity. The classified conversation seems to be about making sure similar strikes in the future get approved nevertheless. Is the whole staggering in parliament a mere form to imply plausible deniability?

The three former secretaries of the departments that stated no involvement in 2015 all denied any knowledge of information about the attack on the 6 and 7th of November 2019. Rutte may have been "judicially aware in 2016 of possible casualties" but lacked any memory whatsoever about a conversation regarding casualties.[30] The Dutch PM cited "military protocol and protection of pilots and families" for his lack of knowledge up until that point. NOS and NRC proved that protocol requiring informing the PM.[31] In November 2019 sources within the Dutch MOD told media they "lost the definitive CENTCOM report".[32]

The NRC released an editorial commentary in 2020 after a new Dutch FOIA request led to release of declassified files that the Dutch commanding officers were actually aware of the "increased risk of civilian casualties" but proceded.[33]. Meanwhile, numerous US FOIA requests have been denied or never heard back from. After the Dutch House of Commons requested Ank Bijleveld to ask the US Department of Defense to release all files regarding this and other Dutch airstrikes gone awry, they responded[34] that all FOIA requests are still on "a waiting list" and other info not previously released was classified and not available.[35]

During the COVID-19 pandemic several parts of the requested declassified documents requested in early 2020 were published. Apart from the more than 25 residential buildings that were "overlooked" and can't be explained by neither government, the U.S Army admitted that the Dutch knew of the increased risk of civilian casualties, but conspired to publish an attack plan that only named "one barn" as the collateral damage, even though the CIA (revealed to have 4 informants in the area) was confirmed to "have warned of the nearby proximity of a civilian neighbourhood", even giving the projected attack the highest rating for potential collateral damage putting the plausible deniability of Ank Bijleveld into question, as Bijleveld survived her 4th[36] night-long debate in the Dutch lower house still blaming the US when being asked how precision strikes on one plant can destroy over 260 buildings.[37]. Dutch Parliament refused to order a parliamentary enquiry even when the Dutch Safety Board confirmed they were prohibited from investigating the case as the Dutch Army can't be trialled if not court-martialled.[38]