2011 will be remembered as the year that the Occupy Movement more or less spontaneously emerged, as a sudden crystallisation of the mass discontent which had been brewing for many years. It started in New York City, but quickly went global, and proved a wake up call to many - although it failed to agree on coherent aims. The destruction of Libya, planning to launch a gold-backed dinar, was one focus of discontent with US Foreign Policy.

2011 saw a significant exposure of Le Cercle; Joël van der Reijden published a guest list on ISGP. Two years after Charlie Skelton's groundbreaking report about the 2009 Bilderberg, in 2011, BBC acknowledged a changing of the official narrative about the group, entitling one article Bilderberg mystery: Why do people believe in cabals? - which reframed the "mystery" associated with the group to speculation about the mental health of people who question its beneficent nature.[1]

Google trends data records that searches for "non-violent extremism" started in January 2011. This is a strategy to try to motivate violent repression of the non-violent, by encouraging fear of those whose ideas are at odds with government sanctioned truth. 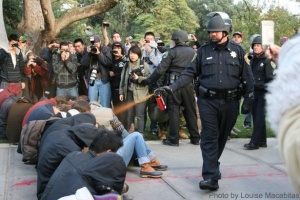 Sergeant John Pike practices his pepper-spray technique on 30 students of UC Davis. They were later awarded $30,000 each in compensation, while he was awarded $38,056 for "psychological injuries" after being publicly derided for his action.

An invitation from Adbusters inviting people to protest Wall St. by physically occupying the space proved to be a spark which ignited a huge well of discontent and hinger for real change amongst young and old in the USA. This movement quickly went global as activists used the internet to collaborate and for mutual encouragement. Similarly to the flower power movement of the late 1960s, the movement seemed to catch the establishment unawares and they were initially nonplussed, before resorting to that time trusted staple of violent repression.

Plans held (made?) by the Dallas police department to assassinate leaders of the local Occupy encampment were not implemented. A February 2015 ruling of Judge Rosemary M. Collyer allowed the plot to remain secret.

In 2011, 18 countries, including 14 NATO members, launched premeditated aggression against Libya. Seven months of NATO airstrikes were estimated to have killed 60,000 Libyan civilians in what was termed a "humanitarian intervention".[2] Pre-war propaganda included lies about "Viagra rapes" by Libyan forces of Muammar Gadaffi.

The US government gave strong rhetorical support to those involved in the 2011 Egyptian Revolution, a sharp contrast with its violent repression of the occupy movement.