The Nederlandse Omroep Stichting or commonly called the NOS is one of the broadcasting organisations in the Netherlands. It has a special statutory obligation by law to make programmes for the three Dutch public television channels and the Dutch public radio services on the only 3 Dutch TV-channels viewable for free on cable and online in similar role to the BBC and ARTE. Nieuwsuur is their main current affairs program.

The NOS has the highest ratings (with 35-45% daily of all households yearly[1]) of all broadcasters and operates similar to the BBC hosting debates and interviews with politicians and consultants. Nieuwsuur is one of their main programs. Although a serious European player with geo-political limited hangouts in investigative journalism, it lacks an English page.

In 2012, former head Hans Laroes revealed a foreign correspondent was blackmailed and pressured by the MIVD to give information to a Dutch MIVD-officer. After mediation between the station and Dutch Minister of Defence Henk Kamp, both names were never revealed.[2]

One of their few English articles was the coordinated press statement that the AIVD "infiltrated" the Russian "Cozy Bear"-group, allegedly showing hacking in the Democratic Party in 2018.[3] This was during the same time Rian van Rijbroek and Willem Vermeend were touring congresses and giving lectures calling for action against "Russian threats" including Kaspersky.

During the Dutch Covid 19 riots in January 2021, the police was accused by protesters to have used "actors" placed between rioters in the city of Amsterdam, to instigate violent actions and steer public opinion[4]. During the riots, Nieuwsuur was the only media source to request officials in the justice department if minors (starting from the age of 11) participating in the protests should be sentenced as adults.[5]

The chief inspector of the police unit in The Hague gave an interview from his office which revealed the office to be home to a banner reading "The NOS is Fake news", a common opinion of the protesters. The chief defended the banner by saying "it was taken from protestors" with the banner removed on the same night shortly after the interview, with the image being removed from the police their twitter account. The unit didn't care to explain why evidence - as the banner would been called normally - ended up all the way there instead of being placed in a safe.[6] 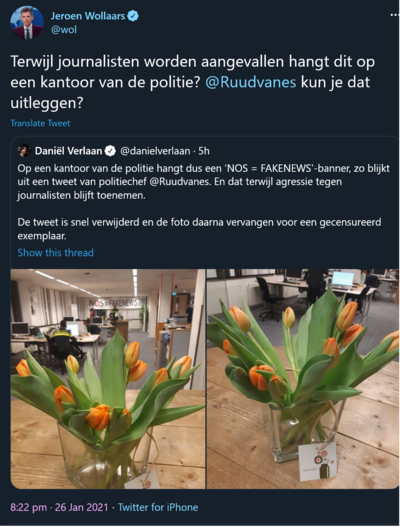 The police unit of The Hague put a "NOS = Fake News"-banner in their office, and removed it only after multiple TV-stations had noticed it in their live interview with an inspector.

A Quote by NOS