Volodymyr Zelensky is the President of Ukraine, elected in May 2019. He was formerly a comedian and actor [1] who started performing in 1995.

Following the 2022 Russian invasion of Ukraine, President Zelensky has become a global figure first lionized for his refusal to abandon Kyiv as Russian missiles struck, and now familiar from his omnipresence on social media, and his sometimes daily speeches to international legislatures and other audiences worldwide.[2]

Throughout 2022, he became adored by Hollywood.[3]

Wikipedia writes: "Born to a Ukrainian Jewish family, Zelenskyy grew up as a native Russian speaker in Kryvyi Rih, a major city of Dnipropetrovsk Oblast in central Ukraine. Prior to his acting career, he obtained a degree in law from the Kyiv National Economic University. He then pursued a career in comedy and created the production company Kvartal 95, which produced films, cartoons, and TV shows including the TV series Servant of the People, in which Zelenskyy played the role of the Ukrainian president. The series aired from 2015 to 2019 and was immensely popular. A political party bearing the same name as the television show was created in March 2018 by employees of Kvartal 95.".

On New Year's Eve 2018, Zelensky launched his presidential election campaign, having played the role of president of Ukraine in the series "Servant of the People" on Ukrainian television. His campaign was focused on bringing peace with the eastern territories, but a week after the inauguration as president he was threatened with death by Dmytro Yarosh, co-founder of the Right Sector, if he were to take actions in that direction.[4]

“Zelenskyy said in his inaugural speech that he was ready to lose ratings, popularity, position.... No, he would lose his life. He will hang on some tree on Khreshchatyk—if he betrays Ukraine and those people who died in the Revolution and the War.”
Dmytro Yarosh (2019)  [5] 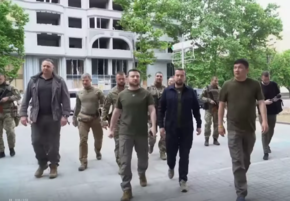 His top aide Serhiy Shefir survived an assassination attempt on 22 September 2021.[9][10] Zelensky himself says he survived more than 12 attempts on his life;[11] it could be noted that while the United States tried to take out Saddam Hussein right at the beginning of the 2003 Iraq war,[12][13] there have been no leadership strikes (as of November 2022) on him during the 2022 Russian invasion of Ukraine - he even was able to safely visit cities close to the front-line.[14]

Talking up the threat of a Russian invasion

On Tuesday 1 February 2022, Boris Johnson arrived carrying a red folder (believed by some to contain the Trident launch codes) for talks with President Zelensky.[15] In a short clip from which the picture to the left is taken, a women can be seen running towards the two, grabbing the folder without the courtesy asking a UK Prime Minister if she can have it,[16] and then moving away in another direction.

"The much-vaunted Pandora Papers revealed the patriotic President Zelensky was storing payments from his top funder, Israeli Igor Kolomoysky, in offshore accounts. Kolomoysky is also a funder of the neo-Nazi Azov Battalion & the Aidar Battalion".[17] 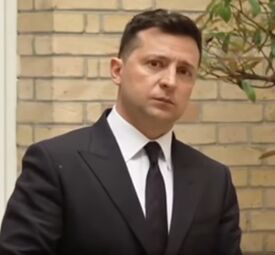 There are some videos,[19][20] one being particularly noteworthy,[21] that show behaviour that could indicate, that Zelensky may have a habit of cocaine consumption. In 2019 (before the election) he refused to have a blood test.[22][23]