From Wikispooks
< NATO
Jump to navigation Jump to search

Wikipedia reports that there "is no formal process for selecting the Secretary General. Instead, the members of NATO traditionally reach a consensus on who should serve next. This procedure often takes place through informal diplomatic channels... The appointment is for 4 years, although it may be extended." 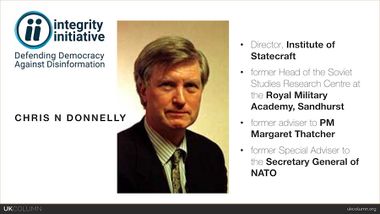 It is an open question whether NATO secretarygeneral has any de facto power, or whether, as a Bilderberg appointee he carries out the will of unnamed "special advisers".

Chris Donnelly, the UK deep politician who in 2006 co-founded the Institute for Statecraft, was just such a special adviser to four secretaries general of NATO (for a total of 13 years)[1], as well as to to figures including Margaret Thatcher.[2]

The main "informal diplomatic channel" appears to be the Bilderberg meetings. Since the official narrative is that this is a mere social event, which just happens to have military grade secrecy, their control of who becomes NATO Secretary General is hard to prove. Nevertheless, it is interesting that all permanent NATO Secretaries General have attended the Bilberberg, and since the 1966 Bilderberg at which the structure of NATO was top of the agenda[3], all permanent Secretary General appointees attended at least one Bilderberg meeting before being given the job. Two temporary appointees, Sergio Balanzino (1994, 1995) and Alessandro Minuto-Rizzo (2003) are not thought to have attended.