Ukraine was formerly a part of the Soviet Union; it is now an independent country in Eastern Europe.[1]

Ukraine borders the Russian Federation to the east and northeast, Belarus to the northwest, Poland, Slovakia and Hungary to the west, Romania and Moldova to the southwest, and the Black Sea and Sea of Azov to the south and southeast, respectively. It has an area of 603,628km², making it the largest country entirely within Europe.[2][3][4]

Ukraine holds the worlds most significant deposits of black soil (chernozems) for farming.[5][6] 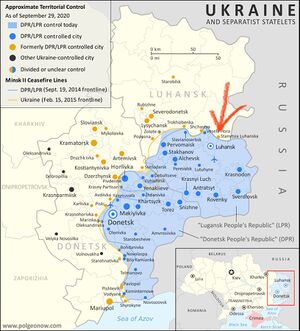 Early in 2022, President Volodymyr Zelenskyy received visits from world leaders Emmanuel Macron, Olaf Scholz and Boris Johnson in an effort to prevent what NATO described as an imminent invasion by Russian troops massed on the border with Ukraine.

However, on 18 February 2022, Donetsk People’s Republic (DPR) head Denis Pushilin and head of the Luhansk People’s Republic (LPR), Leonid Pasechnik, told civilians in the two separatist states in Ukraine's Donbass Region to evacuate to Russia to avoid getting caught in the crossfire in case of an attack by Ukrainian government forces. Pushilin said Russian officials in the neighbouring Rostov Region expected an inflow of 700,000 evacuees. He urged people “to heed to the warning and take the right decision,” saying that the relocation would be temporary and would save lives.[7]

Gallup reported in 2019 that "Just 9% of Ukrainian residents have confidence in the national government, the lowest confidence level in the world for the second straight year".[8]

In 2021, Ukraine received 54,000 doses of AstraZeneca vaccine as "humanitarian" aid from the Government of Lithuania. The country plans to later provide Ukraine with another 77,000 doses of this vaccine.[9]

Anti-vaxxers are allegedly paving the way for Russian invasion.[10]

Ukraine destroyed the nuclear weapons in it's arsenal following the Budapest Memorandum in 1994. The decision was called a historic mistake by some and there were clear statements to the effect more recently, that nuclear rearmament was thought of as a possible option.

The country is aspiring to become NATO member. At the beginning of 2015 the Ukrainian ambassador to Turkey said the Ukrainian armed forces were being funded, trained and equipped for eventual NATO membership.[12] The process, NATO Membership Action Plan (MAP), was first attempted 2008 and strongly pushed for by the Bush administration,[13][14][15] which continued in the process for "distinctive partnership" in 2012,[16] for which the integration of Ukraine's Special Forces into the NATO structure, NATO Response Force (NRF), is a stepping stone, which started 1 January 2014.[17][18][19] By 2017 the DRIVE remarked how Ukrainian special operations forces show a steady increase in Western influence through gear and weapons they carry.[20] In June 2019 units from Ukraine reached the certification status[21][22] and became qualified to be deployed and operate under the umbrella of NATO’s Response Force.[23]

Citizens of Ukraine on Wikispooks