From Wikispooks
(Redirected from Cold War 2.0)
Jump to navigation Jump to search

The Cold War II (or Cold War 2.0) refers to a reprise of the first Cold War which ended in 1990. The reboot has gradually gathered pace and intensity since at least the early 2000s, and swung into high gear after the 2014 coup in the Ukraine. The basic narrative, like the original cold war, is of a "West versus East" conflict, cited as increased reason to increase military spending and increase control over one's own population.

In recent years, increasing efforts appear to have been underway to promote Cold War 2.0 through Russophobic messages in commercially-controlled media. 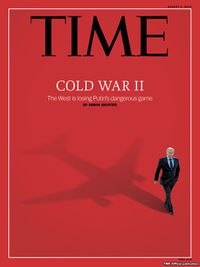 In March 2018, following the attack on Sergei Skripal, AP introduced a story "From Washington to Warsaw, Western nations banded together Monday to expel more than 100 Russian diplomats they accused of being spies."[1] Dan Kaszeta published an article for the Integrity Initiative entitled Demolishing the Kremlin's absurd theories about Novichok and Porton Down in which he attacked theories that challenged the UK Deep state's official narrative.[2]

Cold War Then and Now‎‎? was a conference on 13 October 2018 that was booked by Simon Bracey-Lane of the Institute for Statecraft, later to be exposed as a Russophobic disinformation outfit controlled by the UK Deep state, funded by the UK/FCO and the UK/MoD.

Edward Lucas of the Economist underlined the importance of these links in his books Deception and The New Cold War. Speaking at the Frontline Club in London in 2014, he said that no significant Russian company can operate without a licence from the state in the form of bribes in one form or another; that comment should be extended to the major criminal groups.

On 5 November 2018, 'Anonymous' leaked documents about the Integrity Initiative which used funds from the UK/FCO and the UK/MoD to promote anti-Russian disinformation[3][4][5] by coordinating "clusters" of apparently independent journalists.