Dr Sijbren de Jong is a Dutch social scientist located in Brussels.[1] Maria de Goeij set-up the Dutch cluster of the IfS in The Hague with the help of de Jong and his former employer, The Hague Centre for Strategic Studies, according to the the IfS leaks, with additional help from the Dutch Department of Defence.[2]

Sijbren de Jong graduated from the University of Groningen. Also an alumnus of the Catholic University Leuven, he received a PhD for his study on EU-Russia energy relations.

After graduating, he started writing for several media outlets including the EUObserver, an online-only political newspaper, noted to be only behind the Financial Times in terms of cited publications in the EU diplomatic community.[3] De Jong has a specific focus on Russia and former Soviet-states. He started working for the The Hague Centre for Security Studies in 2012, utilizing his fluency in English, German, French and Russian.

Starting his career as marketing recruiter in 2007 for the Atlantic Community, the first online foreign policy think thank started by German-American NGOs, with leaders such as Horst Köhler and William Wallace[4]. With every employer he has been the Russia and former soviet-states expert. Following a career move to The Hague he started appearing in several Dutch current affairs programs,[5] being a outspoken figure against Russian involvement in the world.[6]

Being a notable public speaker with continuous appearances in support of the Dutch government and their "official narrative", De Jong has over 70 publications in Dutch prominent media and several abroad including The Atlantic Council, the New York Times, Wall Street Journal, Politico and The Economist, advertising himself as being experienced in working with high-level policy-makers in military and non-military positions. 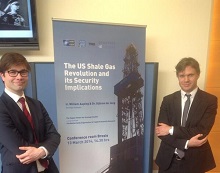 Russian gas-lines are bad folks but promoting fracking - something banned in the UK and the Netherlands - not, it appears.

Most of his publications seem to focus on Russia with some notable examples;

1. The prevention of the growth of Russian gas pipelines, in particular Nordstream. His work around 2015 was getting quoted in an effort to use Nordstream as a pawn in the research for the MH17-culprits.[7][8]

2. The prevention of Russian and Chinese economical and logistical agreements with Middle-Eastern countries, in particular regarding Syria and the Persian Gulf.[9]

3. He was one of the leading pundits on Dutch Corporate media calling for the deployment of ground troops in Syria, particularly after a Russian announcement for main military withdrawal in April 2016, "taking the oil of IS" as one of the main reasons.[10]

De Jong urged the Dutch government to "ignore" referendums in public appearances after a sudden surge in support against the 2016 Ukraine–European Union Association treaty among several Dutch public broadcasters including the one that helped initiating the referendum - a legally consultative referendum - leading up to the vote.

De Jong argued the broadcaster was "reasoning like the Kremlin" and people voting against further involvement of Ukraine with the EU would be "in favour of corruption" and are citing "propaganda of RT".[11] After the victory of the "NO"-camp, he argued Dutch people "do not care" about the treaty because "only 4 million or 32% came to vote", calling the result an embarrassment, citing the "imprisonment if a public figure would've suggested this mere idea of a referendum in Belarus or Azerbaijan" as his conclusive reasoning.[12]

Maria de Goeij reports that the Integrity Initiative's Dutch Cluster was set-up in 2017. It was initially set up in the Hague Centre for Security Studies, supported by the Dutch MOD and launched at a major conference in Summer 2017. The Ministry of Defence, Dutch parliament and the HQ of the HCSS are located within 700 meters from each-other. She recalled that due to "internal politics within the think tank" the expert in this cluster found alternative employment in SHAPE, NATO HQ in Brussels, the current employer of de Jong.[13] It is not known what caused the split or whether de Jong returned to the cluster.