Lithuania is a nation state in northern Europe. It was formerly part of the USSR. Close ties to the Integrity Initiative.

The Integrity Initiative leak revealed that the Lithuianian defence establishment has been working closely with the UK Deep state to "counter Russian disinformation". 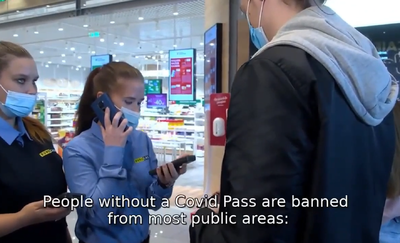 The reality of how much people are empowered to "access and control their personal data" with "health services, organizations and apps you trust"[2] can be seen from this image. 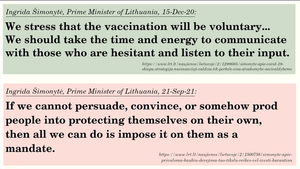 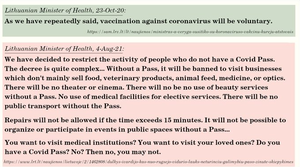 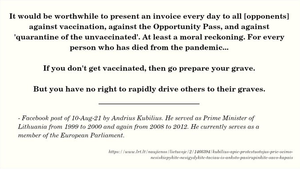 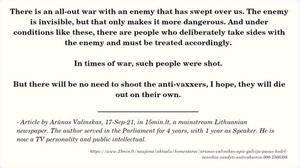 Lithuania has seen authoritarian policies during COVID-19. Starting in September 2021[3], access to all public spaces in Lithuania, including food shops and most health services, will be regulated by a digital Vaccine passport.[4][5][6]

In 2011, Lithuanian authorities initiated prosecution against journalist and diplomat Algirdas Paleckis for "denial of Soviet aggression against Lithuania".[7] As part of his journalistic research, Paleckis stated he had found several witnesses and ballistic assessments that seemed to indicate that there were secret snipers on the roof near the Vilnius TV centre who were shooting civilians, as opposed to the Lithuanian official narrative which declares this to have been done by Soviet troops. He then went on to state publicly that “it appears that in January 1991 our own people were shooting at their natives”. A Vilnius court had vindicated Paleckis in January 2012. The prosecution had appealed, and Paleckis was sentenced to a fine of 10,400 litas (€3,100) on June 12, 2012.[8]

The prosecution against Paleckis was initiated when he spoke on the radio about the widely discussed circumstances of the events of January 13th, both in Russia and in other countries – about the contribution of Gene Sharp, his students and other technologists of the colour revolution to the-then events in the Baltic States, the Caucasus and other Soviet republics that went along the path of separatism.

He was arrested again in 2018 on suspicion of spying for Russia.[9][10][11] As of March 2020 he has been jailed without conviction (or start of legal proceedings) for more than 500 days. More than distinguished 60 signatories across the political spectrum signed an appeal against the prosecution, stating his imprisonment is neither legal nor fair"[12]

Citizens of Lithuania on Wikispooks