The last time a wave of bomb attacks were carried out against European civilian targets, 'leftist' or 'communist' groups were blamed. Eventually the truth came out that those groups were deliberately framed and the real perpetrators were 'commando' type groups working directly under the imperial aegis of NATO, which is to say, the USA, its agents and ideological sympathizers in Europe.

The point of this wave of bombings and shootings was to divide, manipulate, and control public opinion using fear, propaganda, disinformation, psychological warfare, agents provocateurs, and " false flag terrorist acts to achieve the strategic aims of Western governments, in particular the US government. These strategic aims were embedded in the 'Cold War' ideology of preventing left wing, socialist or communist parties from reaching executive power in Europe, reducing US influence and thereby increasing that of the former Soviet Union.

Last year the Chairman of the U.S. Join Chiefs of Staff, Gen. Martin Dempsey, stated that the US government and military was 'dusting off its Cold War playbook' in order to deal with Russia and the threat of it gaining influence over European countries. The Pentagon recently designated Russia as the number one threat facing the US today. One has to wonder then how closely the Pentagon's Cold War strategy is being followed today, and if it involves similar false-flag terror attacks against the civilian population of Europe in order to create a climate of insecurity under which more authoritarian policies can be imposed on the public. One also has to wonder about the strange coincidence of Turkish PM Erdogan warning just a few days ago that, "there is no reason why the bomb that exploded in Ankara [on March 12th] could not explode in Brussels."

But where does Islamic terrorism fit into this template?

You may have noticed that whenever an attack of this kind occurs, it is automatically inserted into the well-established 'rolling narrative' of 'Islamic terrorism'. There is no need, therefore, to provide any real evidence to back up the claim by Western authorities that a 'Muslim suicide bomber' was to blame because 14 years of vicious and deliberate anti-Muslim propaganda means everyone 'just knows' that it was 'the Mooslims'. But for the sake of argument, let's roll with the suicide bomber idea for a moment.

What 95 percent of all alleged suicide attacks have in common since 1980, is not religion, but a specific strategic response to Western (or Western-affiliated) military intervention and/or military occupation of territory that the terrorists view as their homeland, or prize greatly. From Lebanon and the West Bank in the 80s and 90s, to Iraq and Afghanistan and up through the Brussels bombings today, it is Western military intervention in - and specifically Western military occupation of - foreign lands that provokes suicide terrorism more than anything else.

But we still don't buy it. Remove the image of the lone-wolf, wild-eyed terrorist, and what we're dealing with here is clearly a very effective military organization, capable of planning and carrying out complex and devastating attacks in the heart of a high-tech Western society glistening with security apparatus, personnel and intelligence networks. 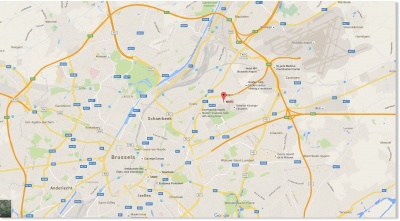 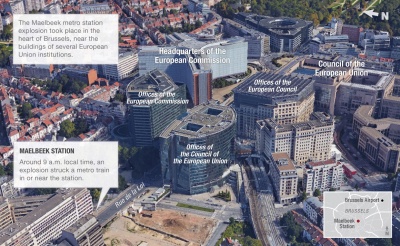 The Brussels attacks were a sophisticated multi-site operation that somehow evaded all digital and physical security of a city that is effectively Europe's Washington, DC, and which has been under a state of high alert since the Paris attacks last November, including the apparently now permanent presence of military patrols on the streets. The attackers then chose two targets that are right next to what should surely have been more enticing targets for jihadists bent on avenging their fellow martyrs' deaths.

Take a look at the map of Brussels. Note that the airport is just a couple of kms from NATO HQ. But the jihadists apparently weren't interested...

Note also that within a 200m range of Maalbeek metro station, the jihadists had a choice of targeting the US embassy, the European Parliament, the European Council building, and any number of European Commission buildings. But again, the jihadists apparently weren't interested, and preferred to attack civilians, which included (no doubt) Muslims. Remember, this is NATO and EU headquarters, the two organisations under which the bombing of Iraq, Afghanistan, Libya and Syria have taken place.

There's something else that perplexes us; why do 'Islamic terror' attacks always involve 'suicide bombers'? If someone has the know-how to build a bomb and plan an operation, why blow themselves up with it? Has the idea of reaching a target and then dropping the bomb and walking away never occurred to these people? More to the point, how do we reconcile the 'suicide bomber' angle in the Brussels Airport bombing when eyewitnesses have claimed that the two explosions there occurred behind the check-in desks, and when a preponderance of lower-leg injuries on victims strongly suggests a bomb lying on the ground?

Of course, we're being a little coy here. Because the idea of an 'Islamic suicide bomber' is a real boon for anyone interested in demonizing Muslims. Apart from the act of killing civilians, the act of 'suicide bombing' - and the complete lack of any survival instinct it conveys - tends to instantly delegitimize you and your cause (if any) in the eyes of normal people, and instead portrays you as an irrational, crazed, fundie nutjob.

This campaign of 'Islamic terrorism' in Europe seems, therefore, to be massively counter-productive to any agenda of liberation of the Middle East from NATO aggression. In fact, it directly facilitates further Western military meddling in the Middle East on the basis of 'dealing with the terror threat' and, as noted, justifies the implementation of police state measures in European society and 'lock downs' on the movement of ordinary people.

What we're getting at here, if you haven't noticed, is that 'Islamic terror attacks' are most likely a form of proxy war waged by the US (and other Western government agents) aimed at maintaining control over their 'interests'. Those interests are (and have always been) control over the political destiny of as much of the rest of the world as possible and, of course, ever finer control over the most valuable resource on this planet: its human population.

Now, this idea of a 'proxy war' waged by governments as a way to conceal their true intentions may be new to you, but it is not new to your political and military leaders. In responding to the attacks in Brussels today, the head of the Ukrainian intelligence service said that he "would not be surprised if it turns out that the Brussels attacks were an element of hybrid war waged by Russia." Of course, the idea that Russia was behind the attacks is risible, and fully in keeping with the ongoing US-led anti-Russia propaganda campaign, which recently saw NATO's Chief warmonger in Europe, General Breedlove accuse Russia of creating the refugee crisis in order to "overwhelm and break Europe". Yes indeed, Russia, a country that has spent the last 6 months destroying the terrorist armies in Syria that created the refugee crisis, is responsible for creating the refugee crisis as a form of 'hybrid war' against Europe! You really have to be a full-blown psychopath, or clinically insane (not much difference) to reach that conclusion.

So hybrid war is the same as proxy war. It is war by indirect means, where one actor aims to produce in his opponent the same effect as a direct attack without directly attacking him, while a third party is blamed. So given that the direct results of so-called 'Islamic terrorism' is renewed justification for Western government control over the Middle East and justification for ever tighter police state controls of European populations, who would you conclude benefits most from these attacks? Russia? Middle Easterners and other Muslims fighting for 'freedom'? Or certain Western political and corporate cliques?