Document:Absolute folly for Britain to get involved in Syria 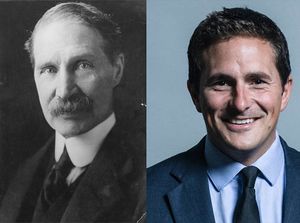 When the British Empire was at its zenith in 1922 the Liberal prime minister David Lloyd George itched to go to war against Turkey in defence of Greece. But the opposition leader Andrew Bonar Law warned against such precipitate action. “We cannot act alone as the policeman of the world,” he declared.

Those wise words silenced the drumbeat for military intervention.

Yet today, despite the loss of our empire and the vast reduction in our Armed Forces, too many of our rulers still retain a misguided belief that Britain should become embroiled in conflict overseas.

The latest focus for this martial posturing is Syria, which has long been gripped by a bitter war between an alliance of Islamist insurgents and the regime of President Bashar al-Assad, backed by Russia.

The struggle has now reached a new level of intensity in the region of Eastern Ghouta near the Syrian capital Damascus, where enclaves of rebels have come under heavy bombardment by Assad and Russian forces.

The savagery of the battle has been the predictable cue for another bout of breast-beating from the armchair interventionists.

Even Foreign Secretary Boris Johnson, who usually has a sense of perspective fed by his love of history, appears to have been infected by the virus of moral grandstanding.

In the Commons on Tuesday, he denounced President Assad and said there was “a case for limited strikes” if the Syrian president was shown to have used chemical weapons.

Having referred to unverified reports that chlorine gas may have been discharged in a rebel-held stronghold at the weekend, Johnson proclaimed that anyone responsible for such an attack “must be held accountable”.

But Johnson's quasi-imperial righteousness paled beside the emotional blackmail of other MPs.

Descending into near hysteria, Labour’s John Woodcock argued that the bodies of dead children from Eastern Ghouta should be “lain at the feet of governments of every single nation which continues to shrug in the face of this horror”.

Tory MP Johnny Mercer, a former soldier, has been just as strident.

In a magazine article this week he demanded, “Britain must come to Syria’s aid” and condemned those who oppose “military intervention”.

This is self-indulgent sentimentality.

It is folly to think that Britain has any kind of military role to play in Syria.

It might feed the vanity of the sabre rattlers but it would do nothing for humanity.

On the contrary our involvement would put British lives at risk and widen the scope of the war.

Our country would end up on the side of brutal Islamic terrorists against the sovereign government of Syria.

But that kind of moral inversion has been at the heart of Britain's disastrous Syrian policy since the civil war began.

The most misguided decision of the coalition government was that made by David Cameron and his foreign secretary William Hague to back the rebels in an inane attempt to bring about the downfall of President Assad – a move that backfired spectacularly.

The Government's idea that the anti-Assad rebels were “moderates” was self-delusion.

In fact, they were exactly the same types as Al Qaeda and Islamic State, bent on the destruction of the West and the establishment of a Muslim caliphate.

To justify this dangerous nonsense the coalition colluded with all the one-sided propaganda about the Syrian conflict.

Much of the British media did the same job, ignoring the actions of the Islamists while blaming Assad or the Russians for every atrocity.

In this manipulative narrative of anguish it often sounds like Syria has the most lavishly resourced healthcare system in the world, given how many hospitals and clinics seemed to be hit by President Assad’s forces.

A classic example of the deceitful, pro-Islamist propaganda occurred in 2016 over the siege of Aleppo, where, just like in Eastern Ghouta today, an anti-Assad rebel enclave was holding the civilian population hostage.

The drive by President Assad and the Russians to retake the city led to a barrage of wailing by the Western political classes and the media.

There were nightly, highly charged reports on television of the impending humanitarian catastrophe.

The Eiffel Tower dimmed its lights “in support” of the people of Aleppo.

Boris Johnson called for protests in London outside the Russian embassy, while the French ambassador to the UN predicted “one of the biggest massacres of a civilian population” since the Second World War.

Yet once the Islamists were kicked out there was no mass slaughter.

According to the UN Human Rights Commission 500,000 Syrians returned to their homes.

The self-important British establishment got it wrong over Aleppo and still badly misreads the situation in Syria.

In fact, after the catastrophes of our interventions in Libya and Iraq, it is amazing that there are still politicians who think we should take action in Syria.

We have no national interests there.

The “something-must-be-done” brigade should be ignored.