In Libya, the US is doing the same thing over and over again and expecting different results. Despite the catastrophic effects of the 2011 military intervention, momentum seems to be growing among western governments for further air strikes in Libya, this time against ISIS.[1]

In January 2016, military sources briefed the commercially-controlled media that US and British Special Forces were in Libya gathering intelligence to prepare for a possible deployment of up to 6,000 US and European troops.[2]

"There is widespread reporting that the UK government is about to commit ground troops to Libya to train government forces there. Is this true and why has Parliament not been informed?"

"If we had any plans to send conventional forces for training in Libya then of course we would come to this House and discuss it."[3]

Between 1977 and 1981, arms dealer and deep state operative Edwin Wilson shipped almost the entire US stockpile of C-4 (plastic explosive) and flew it to Libya. Later he organised training of Muammar Gaddafi's military in bomb making, and sold them a bunch of other weapons. The CIA denied all knowledge, and a jury believed them. Wilson was freed 17 years later when a document emerged which proved that the CIA Inspector General's denial of knowledge was a complete lie.[4]

Libya’s Jews can trace their history back some 2,500 years, long before Arab tribes ever settled the territory. Yet most left the country soon after the establishment of Israel in 1948. Anti-Jewish riots left a dozen dead and nearly 300 homes destroyed, part of the wave of anti-Jewish violence that swept the region in the aftermath of Israel’s war of independence. By 1951, the vast majority of Libyan Jews, some 30,000, had fled to Israel.

The next exodus of about 4,000 Jews occurred in the aftermath of the 1967 Six Day War. By the time Gaddafi seized power two years later, there were only 100 Jews left. He exacerbated their plight, as well as that of the Jewish exiles, by confiscating all property owned by Jews and by cancelling all debts owed to those Libyan Jews whose property had already been seized or destroyed.

However half-hearted, Gaddafi’s latter-day outreach toward his country’s exiled Jews was part of a broader public relations campaign that began in 1999, when the dictator attempted to radically alter his reputation from that of international pariah into something more respectable. That year, Gaddafi turned over two Libyan citizens to the Netherlands, where they would be tried for their role in the 1988 Pan Am Flight 103 bombing. He also expelled the Abu Nidal Organization, the terrorist group that had carried out deadly attacks on El Al ticket counters in Rome and Vienna in December 1985, and closed down the training camps that had hosted the whole panoply of terrorist groups ranging from the Irish Republican Army to the Basque ETA to the Popular Front for the Liberation of Palestine.

The regime’s rapprochement with the Libyan Jewish community seems to have been the initiative of the dictator’s son and heir apparent, Saif al-Islam Gaddafi, who, at least until the uprising began in February, was viewed by many in the West as a liberal reformer. While a doctoral candidate at the London School of Economics, Saif is said to have befriended Nat Rothschild, heir to the Jewish banking fortune, and is rumoured to have stayed at Rothschild’s Corfu villa. The Financial Times recently reported that in 2008, the Manhattan-based public relations firm Brown Lloyd James set up meetings for Saif with American Jewish leaders. Raphael Luzon isn’t surprised. He claims Saif is “friendly with a lot of rich Jews,” and the Israeli newspaper Maariv once reported that he was romantically linked to the Israeli actress Orly Weinerman.[5]

Libya was on a list of seven countries which retired 4-star general Wesley Clark (former supreme commander of NATO forces in Europe 1997-2001) stated the US military had plans to invade:

In 2001, in the Pentagon, a general told me : ‘I just received a classified memo from the Secretary of Defense: we will take seven countries in five years, starting with Iraq, then Syria, Lebanon, Libya, Somalia, Sudan and finally, Iran.’[6]

The US and NATO launched unprovoked attacks on Libya in 2011, killing an estimated 60,000 Libyan civilians, terming this supreme crime an act of "humanitarian intervention".[7] In a May 2011 interview with RT, researcher Ian R. Crane claimed that the Arab Spring was a false flag from the outset and that Libya was the ultimate goal all along.[8]

"Within the next several years, Libya began to look not so much like the lucky beneficiary of R2P as its abject victim. Yes, Gaddafi was gone, but the decapitation of the Libyan state that his removal represented resulted in waves of armed violence and an enveloping political and economic chaos that not even the mainstream media could ignore."[9]

Libya "has been wrecked, not saved, by the U.N.’s intervention, and any freedom its citizens enjoy is purely of a formalistic and empty kind."[9]Thus, in assessing the harm that has resulted from wrecking the Libyan state, the question to ask is not whether Libya had previously been a dictatorship, but whether Libya had been a place where men and women had been able to enjoy a common life. And the answer was: “Yes, it had been such a place.” 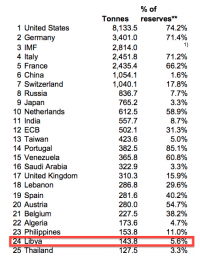 In March 2011, Gaddafi's Libya had declared gold reserves worth more than $6 billion at the then current prices. At nearly 144 tonnes, the reserves were ranked in the global top 25, according to International Monetary Fund (IMF) data.[10]

"Following a 6-month stalemate in which neither side had attained any advantage, it suddenly took just a few days for the Libyan rebel forces to steamroll unopposed into Tripoli. While we are confident that the political aftermath of this outcome will be very much comparable to what is happening in Egypt right now, many wonder why it is that the Libyan situation has progressed with such speed.

"Perhaps the answer can be found in the 143.8 tonnes of gold held by the Libyan Central Bank.[11]

"Global central banks were reported to be carving up Africa’s most oil-rich nation while simultaneously divvying up around 144 tonnes of gold bullion – which might go some way to repaying Hugo Chavez after his announcement that Venezuela is to nationalise its precious metals industry. Unless of course Chavez becomes the next head on the chopping block for another 'humanitarian intervention'."[12]

The Libyan Investment Authority (LIA) claims to control $67 billion of Libya's sovereign wealth.[13] Control of the LIA is disputed between AbdulMagid Breish[14] who has an office in Tripoli where he says he is the LIA Chairman; and, Hassan Bouhadi[15] who runs another LIA head office from Malta, also claiming to be Chairman.[16]

On 7 March 2016, adjourning a case in London’s High Court over the leadership claims of Breish and Bouhadi, the two rival heads of the LIA, Judge William Blair declared it would be premature to rule while moves were afoot to form a Government of National Accord in Libya.[17]

Citizens of Libya on Wikispooks