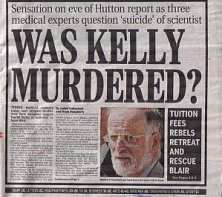 On 17 July 2003, a UK government whistleblower and weapons inspector in Iraq, David Kelly was found dead in the woods near his house. Ah inquest into his death was started but never completed. The UK government's official narrative is that he committed suicide, but many voices have suggested that this seems implausible and/or impossible. 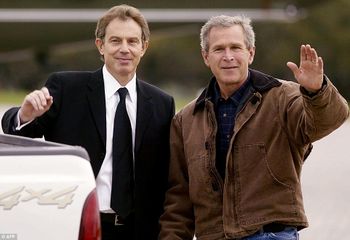 Tony Blair conspired with George W. Bush to launch an illegal and war on Iraq.

In 2003, an illegal war of aggression was carried out by the US leadership, with the collaboration of others such as Tony Blair. This was responsible for the violent deaths of over a million Iraqis, and led millions more to flee the country. These actions were found to be war crimes by the Kuala Lumpur War Crimes Commission[1] and are widely seen as such by a lot of the world's population.[citation needed]

In 2003, the US was revealed to be systematically torturing prisoners in a prison in Abu Ghraib. Although this was not revealed at the time, it emerged in 2004 that the atrocities were part of a program (codename Copper Green) that was ordered by Donald Rumsfeld of research into the effect of carrying out and of suffering torture. Tom Malinowski, the director of Human Rights Watch would later comment about a leaked document that “If anyone still thinks that the only people who dreamt up the idea about torturing prisoners were just some privates and corporals at Abu Ghraib, this document should put that myth to rest.”[2]

In 2003, Willem Matser, a Dutch spook, and "key advisor" to NATO Secretary General was arrested with documents relating to a $200,000,000 money transfer from Bogota, Colombia,[3] together with a convicted cocaine dealer, Pietro Fedino connected to the Cali cartel.[4] A year later, Matser was found guilty of forgery and fraud and released with time served plus a 3 months' suspended sentence.[5]