“Russia’s disinformation campaigns have enabled the Kremlin to sow divisions in Europe’s societies. Countering these actions requires the development of effective, multi-layered strategies, tactics and capabilities. HCSS organizes a conference on 22 June 2017 to bring together and expand upon a network of stakeholders involved in countering Russian societal interference in European countries.

Through the exchange of governmental responses used at the military and foreign policy level, and the experiences of societal bottom-up initiatives and fact-checking collaborative initiatives, we can begin to build an increasingly coherent response to Russia’s strategic narratives.

The explicit goal is to foster a self-sustaining network that can act as a dissemination point in countering Russian disinformation and other kinds of malign interference. Through the stimulation of debate, participants will produce a concise overview that will take stock of best practices and perspectives for action.”
' [1]

Answering Russia's Strategic Narratives was a one day event on 22 June 2017 organised by The Hague Centre for Strategic Studies, which described it as a "conference", although because it was by invitation only, it is classified here as a meeting.

Katharine Klačanský, working as an intern for The Hague Centre for Strategic Studies, used to report on her Linkedin page that she organised the conference from May to June 2017 as an assistant intern analyst. In January 2021, after a screnshot was published on her Wikispooks page, she removed mention of the event from her profile. 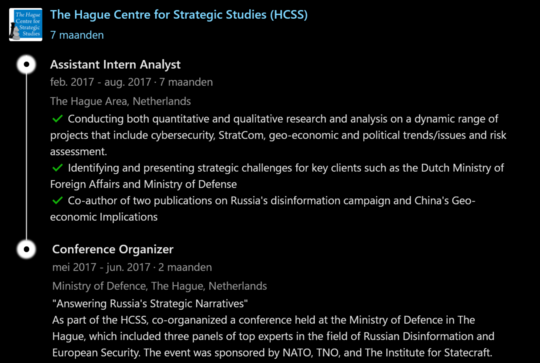 Reports from the HCSS from after the meeting revealed Stopfake and the East StratCom Task Force granted their database (of files on media sources, individuals and their role in reporting Russian news or interests of Russian media) to the HCSS for an "offensive" to set-up sites and institutes that would "monitor Russian disinformation", seemingly explaining the reason Yevhen Fedchenko and Ida Eklund-Lindwall became part of the Dutch Cluster of the IfS.[2]

The conference was exposed by the Integrity Initiative leaks. Gry Waagner Falkenstrøm, a Danish Ph.D student reports attending the conference.

1 of the 1 known participants already have pages here: