Document:NATO goes to war against Russia 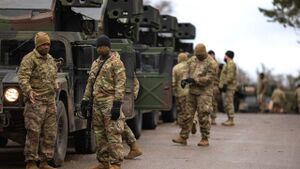 US Army convoy to Romania (7 February 22)

The essential causes and interests of wars are often not at first apparent. They are concealed by an avalanche of propaganda. However, sooner or later, the real and more profound driving forces and significance of the conflict emerge.

In the case of the conflict in Ukraine, the nature of the war is being revealed with considerable speed. Ukraine is only the initial physical battleground in what is, in essence and fact, a war between NATO and Russia.

The non-membership of Ukraine in NATO is, and has been for several years, largely a fiction. Already substantially armed and with weapons pouring in, Ukraine is the front line in a war aimed at regime change in Moscow and the complete subordination of Russia to NATO.

Developments over the past several days make this clear. These include:

First, massive economic sanctions imposed by the United States and the European powers are aimed at crippling the entire Russian economy. In the past 24 hours, major Russian banks have been disconnected from the SWIFT international payment system, while the assets of Russia’s central bank have been effectively frozen.

The moves against the Russian central bank will have a particularly devastating and immediate impact on the entire Russian economy. A senior Biden administration official said Monday that the action would block access to “hundreds of billions of dollars” in assets. “The Rouble is in freefall,” he gloated, “and soon you’ll see inflation spike and economic activity contract.” He referred to the sanctions as “our commitment to deliver overwhelming force” against Russia.

One calculation of the imperialist powers is that the destruction of the Russian economy and the Rouble will deepen divisions within the Russian oligarchy and fuel social discontent, creating the conditions for regime change and even the breakup of the country. “If people trust the currency, the country exists,” the New York Times quoted Michael S. Bernstam, research fellow at the Hoover Institution at Stanford University. “If they don’t, then it goes up in smoke.”

Second, NATO countries are delivering advanced weapons systems directly to Ukraine. The United States has sent $1 billion in military aid to Ukraine in the past year, with the most recent tranche of $350 million committed by US Secretary of State Antony Blinken on Sunday. Washington is directly arming Ukraine with Stinger surface-to-air missiles and Javelin anti-tank missiles. The Ukrainian forces are already using the advanced “fire-and-forget” Javelin technology against Russian tanks, supplied to them by the United States in January before the invasion.

German Chancellor Olaf Scholz announced Sunday that $110 billion in additional funding would be provided for the German military, nearly twice the amount of its annual budget, and that Germany will also be supplying direct military aid to Ukraine. The machinery of German imperialism, mobilised against the Soviet Union during the Second World War, is moving once again towards Russia over the fields of Ukraine.

The European Union is also, for the first time, financing the purchase and delivery of weaponry to Ukraine.

Third, abetted by governments, private fighting forces are being sent from NATO countries to Ukraine. On Sunday, Ukrainian President Volodymyr Zelensky announced that Ukraine would establish an international legion for its war against Russia, saying, “Anyone who wants to join the defence of Ukraine, Europe and the world can come and fight side by side with the Ukrainians against the Russian war criminals.”

The networks for the deployment of these soldiers of fortune have been in existence since 2014. They have funnelled far-right elements to Ukraine and back to their home countries, where they have on occasion been found guilty of white supremacist terrorism. In Ukraine, the forces have worked with the Azov Battalion and the Georgian National Legion. These networks are now receiving the open assistance of the British and American governments. More than 60 such individuals, most of them retired special operations forces, have travelled from the UK and at least six from the United States in the past week.

Fourth, US and European officials are issuing increasingly bellicose statements that they are planning for direct war with Russia. The addition of 7,000 US troops to Eastern Europe announced by the Biden administration last week brings the total US deployment on the continent to over 100,000.

Asked Monday whether the additional troops would be incorporated into the NATO “Rapid Reaction Force,” which was activated on Friday, Defense Department spokesman John Kirby said, “Should it be activated, we want to be sure we’re ready.”

Fifth, there is a coordinated and ferocious anti-Russia campaign in the media. From the corporate media to social media, the barrage of war propaganda is bone-rattling. CNN breathlessly presents flak jacket reportage of alleged Russian atrocities, and the New York Times dedicates a majority of its pages to putting these in print. On Monday, NBC correspondent Richard Engel raised on Twitter whether the US and NATO should destroy a Russian convoy outside of Kiev, even if this meant “direct involvement against Russia.”

Academics, both the impressionable and the dishonest, flood Twitter with vitriol directed at Putin and Russia, while ignoring the fact that the Ukrainian military is riddled with far right and fascistic forces.

The uninterrupted media salvoes are aimed at creating a climate of hatred directed at Russia and Russians. The claims that the US is not targeting the Russian people are belied by the campaign to prevent Russian musicians and athletes from performing and competing in international events. This is combined with the demand that Russian goods be removed from shelves.

A central aim of this propaganda offensive is to distract the population from the social crisis, soaring prices, and the staggering levels of death from the pandemic, and attempt to direct mass anger behind the imperialist war drive.

None of this changes in any way the World Socialist Web Site’s opposition to the Russian government’s invasion of Ukraine. The Putin regime, representing the interests of a faction of the Russian oligarchy, is responding to the catastrophic consequences of the dissolution of the Soviet Union through the promotion of reactionary Russian nationalism, combining nuclear brinksmanship and threats with a desperate attempt to forge some sort of agreement with American and European imperialism.

The invasion of Ukraine has served only to divide the Russian and Ukrainian working class, while creating popular confusion and disorientation in the imperialist countries that are being utilised by the US and NATO to advance their plans for war.

The longstanding aims of US and European imperialism to dismember Russia intersect with what is now the central driving force behind the war frenzy: the immense social and economic crisis in Washington and other capitals.

The escalation of this war threatens mankind with a catastrophe. Under such conditions, it is necessary to be driven not by emotion, to be swept up in the propaganda of capitalist governments and the mass media, but to analyse clearly what is taking place and develop, on that basis, an independent orientation for the working class.

There must be a new mass anti-war movement, based on the international working class. This opposition, however, must be developed as a conscious political movement for socialism. This means the building of the International Committee of the Fourth International and its affiliated Socialist Equality Parties in every country.[1]