1976 saw the first meeting of the Safari Club, a metastasis of the US deep state, which saw it effectively regroup outside of the CIA (or any of the formal institutions of the USA government) as a response to increased scrutiny. This was an important step in the creation of the Supranational Deep State. 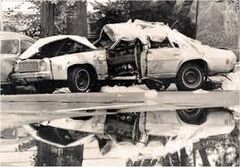 Orlando Letelier was assassinated in Washington's 'Embassy Row', in a CIA-backed plot operated through CIA assets Manuel Contreras‎ (Chilean spymaster) and Michael Townley. The CIA used Operation Mockingbird assets to leak a fake CIA report designed to throw the FBI off the scent. John Stockwell reports that George H. W. Bush personally requested the DOJ to soft pedal their investigation of the crime.[1]

Two weeks later, on October 6, a Cuban commercial airliner exploded in mid-air over the Caribbean, killing all 73 passengers on board. Confessions in the latter case implicated Dr. Orlando Bosch.[2]

The House Select Committee on Assassinations began a semi-controlled investigation into political assassinations, especially those carried out by the CIA.