The NT covers 1349129 km2, making it the third-largest Australian federal division, and the 11th-largest country subdivision in the world. It is sparsely populated, with a population of only 247,000, the majority of whom live in the capital city of Darwin. The territory's population represents 1% of the total population of Australia[2] 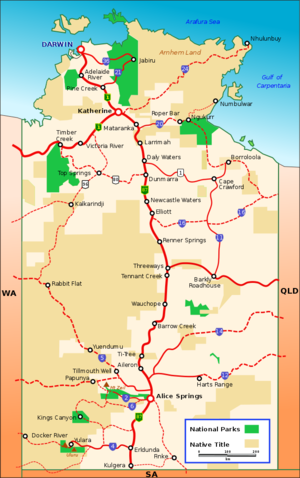 Close to half the population is of indigenous heritage, many spread in small, remote and poor communities.

The NT has a connected network of sealed roads, including two National Highways, linking with adjoining States and connecting the major Territory population centres. The Stuart Highway runs north to south, connecting Darwin and Alice Springs to Adelaide. Some of the sealed roads are single lane bitumen. Many unsealed (dirt) roads connect the more remote settlements.

The strategic Adelaide–Darwin railway, completed in 2004, connects Adelaide via Alice Springs with Darwin.

On 16 November 2011, Prime Minister Julia Gillard and President Barack Obama announced that the United States would station troops in Australia for the first time since World War II. The agreement between the United States and Australia would involve a contingent of 250 Marines arriving in Darwin in 2012, with the total number rising to a maximum of 2,500 troops by 2017 (formally on six-month rotations) as well as a supporting air element including F-22 Raptors, F-35 Joint Strike Fighters and KC-135 refuelers[4], in a move directed against Indonesia and part of the ongoing encirclement of China

The Coniston massacre, which took place in the region around the Coniston cattle station in the then Territory of Central Australia (now the Northern Territory) from 14 August to 18 October 1928, was the last known officially sanctioned massacre of Indigenous Australians and one of the last events of the Australian Frontier Wars.

In a series of punitive expeditions led by Northern Territory Police constable William George Murray, people of the Warlpiri, Anmatyerre, and Kaytetye groups were killed. The massacre occurred in response to the murder of dingo hunter Frederick Brooks, killed by Aboriginal people in August 1928 at a place called Yukurru, also known as Brooks Soak. Official records at the time state that at least 31 people were killed, however analysis of existing documentation and Aboriginal oral histories reveal that the fatalities were likely to have been as high as 200.[5]

The Howard Springs Quarantine Facility was the first of its kind in Australia.