Germany is a nation state in Europe. In 2013, it was #8 in the world in terms of military expenditure.[1] It ranked 5th worldwide as regards arms export from 2012-2016, after 4 UN Security Council members, US, Russia, China and France.[2] 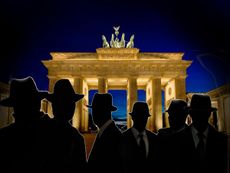 After World War II, the US and UK deep states took the opportunity to try to establish clandestine control of the country, while also creating a plausible democratic process behinds which to hide their influence. The extent to which Operation Gladio was/is used is uncertain. Le Cercle has been an important deep state milieu for the post-WW2 German Deep state.

In 2015, Germany signalled that it intended to ease laws that make it hard for organisations to operate open access public WiFi.[4]

In 2016, a report indicated that the BND was planning a large increase in its mass surveillance capabilities.[5]

In 2017, German authorities were revealed to be "preparing a law that will force device manufacturers to include backdoors within their products that law enforcement agencies could use at their discretion for legal investigations. The law would target all modern devices, such as cars, phones, computers, IoT products, and more."[6]

At the beginning of 2020, the WEForum on their website mentions Germany as an example for how to fight the "epidemic" properly.[7] By early 2021 some voices (like former Interior Minister Thomas de Maizière)[8] call for changes in the constitution to enable a state of emergency more easily in the future.

An ambassador to Germany

Citizens of Germany on Wikispooks