Laura Kuenssberg is a Scottish TV journalist who was appointed Political Editor of BBC News on 22 July 2015, the first woman to hold the position.[1][2]

In January 2016, in a veiled reference to Laura Kuenssberg, the former Political Editor Nick Robinson wrote to colleagues warning them against anti-Corbyn bias in the BBC's political coverage.[3]

The same month, Kuenssberg was involved in arranging for the Labour MP Stephen Doughty to publicly announce his resignation as a Shadow Foreign Office Minister on the BBC's Daily Politics programme. The incident was the subject of an official complaint from Seumas Milne, the Labour Party's director of communications, which was rejected by Robbie Gibb, then the BBC's head of live political programmes.[4]

By May 2017, a Change.org petition calling for the immediate sacking of Laura Kuenssberg from the BBC had attracted over 21,000 signatories.[5]

On 17 December 2019, Kuenssberg presented the BBC documentary "The Brexit Storm Continues: Laura Kuenssberg's Inside Story", which covered Boris Johnson's arrival at 10 Downing Street through to the UK/2019 General Election.[6]

On 11 December 2019, the eve of the UK/2019 General Election, Laura Kuenssberg appeared to have broken Electoral Law by revealing on the BBC's Politics Live programme confidential information about how Postal Voters had cast their vote prior to 10pm on polling day:

“The reason broadcasters are not allowed to reveal postal votes before 10pm polling day is it influences the vote. I really have no explanation of how this is allowed under broadcasting code.”[8]

Evolve Politics website contacted both the BBC and the Electoral Commission for comment. The latter advised Evolve Politics to report the incident to the police, which they did.[9]

On 21 June 2016, Laura Kuenssberg scooped an exclusive TV interview with Brendan Cox, only edited extracts of which were broadcast by the BBC.[10]

How soon after the EU Referendum vote on 23 June 2016, the full interview - including Kuenssberg's inevitable sniping against the Labour leader Jeremy Corbyn - will be broadcast, remains to be seen. 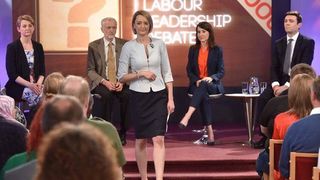 On social media Laura Kuenssberg has been accused of conducting a series of politically-biased attacks on Labour leader Jeremy Corbyn.[13] Kuenssberg's extended interview with Corbyn on 16 November 2015 (three days after the terrorist attacks in Paris) is regarded as initiating her campaign.[14]

On 10 May 2016, an online petition with 33,375 signatures calling for Laura Kuenssberg to be sacked from her role as BBC Political Editor was scrapped by 38 Degrees, reported by The Guardian as saying it had become a focal point for misogynist abuse.[15] At PMQs on 11 May 2016 David Cameron denounced the petition as "sexist".[16] When Craig Murray, one of the signatories, asked for evidence of this sexism he was refused.[17] Murray said:

"Laura Kuenssberg is I think the most openly biased journalist I have ever seen on the BBC, particularly in her very obvious vindictive hatred of Jeremy Corbyn and of Scottish Independence. Nobody seriously believes the BBC actually would remove her even if the petition reached a million. The continued process of stigmatisation of decent dissidents as 'antisemitic' or 'misogynist' is characteristic of a society in which deviating from the political line is rewarded with social stigma and exclusion."[18]

On 11 May 2016, a petition demanding that 38 Degrees "cite the 'sexist abuse' evidence for scrapping our Laura Kuenssberg petition", and "convey full details individually to each signatory", gained over 500 signatures within 24 hours.[19]

On 2 June 2016, Laura Kuenssberg was booed and hissed as she prepared to question Jeremy Corbyn after he had made a speech on the EU Referendum.[20]

Laura Kuenssberg was born in Italy, while her father was assigned there by Coats Viyella.[23] She grew up in Glasgow, with her brother and sister,[24] and attended Laurel Bank School, an independent girls' school.[25]

Kuenssberg studied history at the University of Edinburgh, followed by a journalism course at Georgetown University in Washington D.C., where she worked on an NBC News political programme.

After returning to UK, she worked for local radio and then cable television in Glasgow, before joining BBC North East and Cumbria in March 2000. Kuenssberg won a regional Royal Television Society award for her work as home affairs correspondent, and produced segments for the social affairs editor Niall Dickson. Kuenssberg reported for Channel 4 News prior to moving to the BBC.

Appointed chief political correspondent for BBC News, Kuenssberg reported for BBC One bulletins, The Daily Politics and the BBC News Channel. In May 2010, her presence was so ubiquitous in the period between the general election and the formation of a coalition government under David Cameron that journalist David Aaronovitch coined the term "Kuenssbergovision."[27]

In September 2011 Kuenssberg took up the newly created role of business editor for ITV News and contributed towards business reporting on ITV's current affairs strand, Tonight.[28] On 27 August 2013 she made her debut co-newscasting ITV News at Ten alongside Alastair Stewart.

On 12 November 2013 it was announced that she would leave ITV to return to the BBC as chief correspondent and a presenter of Newsnight, replacing Gavin Esler in the latter role. She joined the Newsnight team in February 2014.[29][30]

In July 2015 she was appointed the BBC's political editor, the first woman to hold the position.[31]

This page imported content from Wikipedia on 7 January 2016.
Wikipedia is not affiliated with Wikispooks.   Original page source here
Retrieved from "https://wikispooks.com/w/index.php?title=Laura_Kuenssberg&oldid=228825"
Categories: