The UK Deep state has used paedophilia to entrap and the blackmail people for decades.[1] This became especially important after the legalisation of homosexuality in the UK in 1967.[citation needed] As in other countries, those affected held key posts in politics, government, entertainment. One of the most prominent (posthumous) exposures was Jimmy Saville.

Repeated dossiers of evidence were collected and then lost by the UK establishment. Al Jazeera summarized the situation in February 2020:[2]

British politicians turned a blind eye to the sexual abuse of children and actively covered up allegations over decades, an independent inquiry into historical sex offences in Westminster has found.

The inquiry did not find evidence of an organised paedophile network in its examination of the period, covering the 1960s through until the ’90s.

But the report found there “have been significant failures by Westminster institutions in their responses to allegations of child sexual abuse”.

“This included failure to recognise it, turning a blind eye to it, actively shielding and protecting child sexual abusers and covering up allegations,” said the summary of the report.

In the 1980s, Geoffrey Dickens worked to expose organised paedophilia of UK establishment figures, naming Peter Hayman, a former Deputy Chief of MI6. He was criticised for this at the time,[3] but the information proved correct. In 2015 documents emerged that showed that the UK prime minister, Margaret Thatcher, had already been alerted to this, but took no action.[4][5][6]

Geoffrey Dickens assembled a dossier of evidence about the VIPaedophile phenomenon in the UK.[7][8] In 1984 handed it to Leon Brittan, then Home secretary, who reportedly "lost" it. It has come to be known as the "Westminster paedophile dossier". 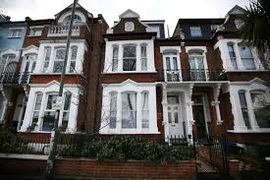 VIPaedophile venues included Dolphin Square, a block of flats conveniently close to the UK parliament. At one time it was home to more than 70 MPs, and at least 10 Lords.[9] Another venue in London was the Elm Guest House. Northern Ireland venues included the Kincora Boys' Home, run by a member of MI6.

Notable people in politics and society that had allegations against them are:

Leon Brittan was a British politician, Conservative Member of Parliament and barrister, as well as a member of the European Commission. He served several ministerial roles in Margaret Thatcher's government, including Home Secretary.

Sir Clement Raphael Freud was a knighted British broadcaster, writer, politician, and grandson of Sigmund Freud. In 2016, seven years after his death, three women made public allegations of child sexual abuse and rape by Freud, which led to police investigations. 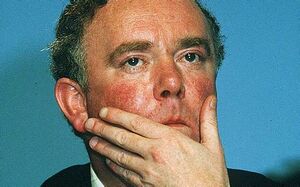 Peter Morrison, in the 70s and 80s was the private secretary to Margaret Thatcher (British prime minister at the time), was with others: "known or rumoured to be active in their sexual interest in children and were protected from prosecution in a number of ways", by police, prosecutors and political parties.[2]

One alleged victim recounts his childhood account in an article about sexual predator Sir Peter Morrison and the Westminster paedophile ring in The Telegraph.[10] (allegations by 'Nick' were )

A declassified FBI document reported that Louis Mountbatten (mentor to Charles Windsor) as "a homosexual with lust for young boys".[11]

Elizabeth Wharton Drexel in a 1944 interview considered Mountbatten to be unfit for military command because he was known among the royal circles to be attracted to young boys. Ron Perks who worked as his driver in Malta in 1948, alleged to Lowens that one of his favourite destinations was the Red House, a brothel for homosexual men in Rabat which he did not know of at that time. Mountbatten had several known homosexual friends including Noël Coward, Terence Rattigan, Ivor Novello and Tom Driberg who called him "Mountbottom". Lownie also interviewed a neighbour of Mountbatten who also allegedly had a sexual relationship with him in the 1970s when he was 20–30 years old. Francis Wheen, Driberg's biographer, stated that he had received a letter from a man alleging that Mountbatten had tried to seduce him while he was 17 but the letter was lost in a fire. Anthony Daly, a male prostitute in a relationship with Driberg, claimed that the latter told him Mountbatten was attracted to young men in military uniforms and boys in school uniforms.[12] 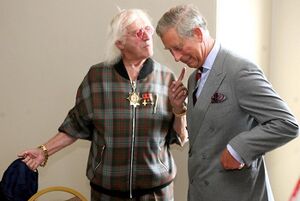 Prime Minister Margaret Thatcher pushed for a knighthood for serial child sex abuser Jimmy Savile, seen here together at a 1980 fundraising event for the National Society for the Prevention of Cruelty to Children. - From the Al Jazeera article, "British politicians 'covered up child sex abuse for decades'".

Jimmy Savile was an English entertainment media personality, charity fundraiser, and good friend of the British Royal Family and Tony Blair.[13][14] Hundreds of allegations of sexual abuse over many decades were made against him but were not exposed until after his death.

Margaret Thatcher also pushed for a knighthood for Jimmy Savile, which he got in 1990, despite revelations in the media about the TV presenter's sexual abuse of children, [a 2020 173-page report] said. The inquiry also discussed the Paedophile Information Exchange (PIE), which campaigned for the public acceptance of paedophilia and for changes in the law to allow adults to have sex with children. [...] The Independent Inquiry into Child Sexual Abuse (IICSA) - of which the Westminster investigation is one strand - is one of the largest and most expensive ever undertaken in the United Kingdom. - Al Jazeera[2] 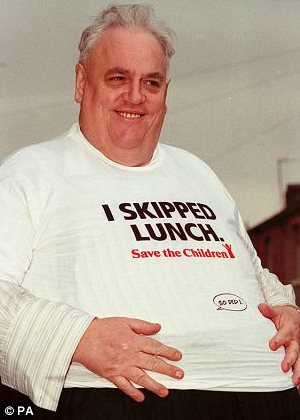 Alleged pedophile Cyril Smith in a T-shirt that says, "I skipped lunch. Save the children."

Cyril Smith received a knighthood (the British honour which awards the title "Sir") and was "known or rumoured to be active in their sexual interest in children and were protected from prosecution in a number of ways", by police, prosecutors and political parties.[2] Daily Mail reported that: "MI5 and Special Branch 'covered up Cyril Smith's abuse of boys'".[15][16] 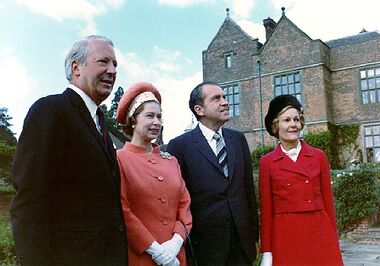 Edward Heath and Elizabeth Windsor with US President Richard Nixon and First Lady Pat Nixon during the Nixons' 1970 visit to the UK.

Wikipedia explains in his article, in the section: "Allegations of child sexual abuse" (allegations by "Nick"), the following:[17]

"In April 2015, a rape claim against Heath was investigated by the Metropolitan Police but was dropped.[18] In August 2015, several police forces were investigating allegations of child sexual abuse by Heath.[19] Hampshire, Jersey, Kent, Wiltshire, Gloucestershire and Thames Valley constabularies and London's Metropolitan Police investigated such claims.[20][21] It was reported that a man had claimed that at the age of 12 years he had been raped by Heath in a Mayfair flat in 1961, after he had run away from home.[22][23] Allegations about Heath were investigated as part of Operation Midland, the Metropolitan Police inquiry into historical claims of child abuse and related homicides.[24] A witness called 'Nick' was introduced to the police by the former Exaro website, who had asked him about alleged child sexual abuse by prominent figures at the Dolphin Square apartment complex in Pimlico, London; Heath was reported to be one of the figures.[25] In 2018 "Nick", whose real name is Carl Beech, was arrested and charged over child pornography offences[26] and in January 2019 he pleaded guilty.[27] Beech, who had fabricated allegations against Heath and other prominent politicians and civil servants, was sentenced in July 2019 to eighteen years in prison.[28]

Also in August 2015, Sky News reported that Jersey police were investigating allegations against Heath as part of Operation Whistle,[19] and a similar investigation, Operation Conifer, was launched by Wiltshire Police at the same time.[29] The Sir Edward Heath Charitable Foundation, which operates the museum at Arundells, his home in Salisbury, said it welcomed the investigation.[30] In November 2016, criminologist Richard Hoskins said that the evidence used against Heath in Operation Conifer, including discredited allegations of satanic ritual abuse, was "preposterous", "fantastical" and gained through the "controversial" practice of recovered-memory therapy.[31] In March 2017 Operation Conifer was closed, having cost a reported £1.5 million over two years, as no corroborating evidence had been found in any of the 42 allegations by 40 individuals (including three different names used by one person).[32][33]

In September 2017 it was announced that the Independent Inquiry into Child Sexual Abuse would review the police investigation into Heath.[34] Police said that if Heath were still alive they would have interviewed him under caution in relation to seven out of the 42 allegations,[32] but nothing should be inferred about his guilt or innocence.[35][36] In his summary report, Chief Constable Mike Veale confirmed that "no further corroborative evidence was found" to support the satanic abuse claims.[32] "

The Paedophile Information Exchange was a group set up in 1974 that promoted paedophilia and campaigned to lower the age of consent. Membership was small, estimated as around 250 by 1977,[37] but included many figures of social influence such as Peter Hayman, a former Deputy Chief of MI6. It was closed down after a decade, but its existence allowed the establishment of a network which was to prove of continuing importance.

(Not to be confused with the Westminster paedophile dossier)

The Oxford child sex abuse ring was a group of seven men who, in May 2013, were convicted of sexual offences including rape, conspiracy to commit rape, arranging or facilitating child prostitution, trafficking for sexual exploitation, and procuring a miscarriage.

The Rotherham child sexual exploitation scandal consisted of the organised child sexual abuse that occurred in the northern English town of Rotherham, South Yorkshire, from the late 1980s until the 2010s and the failure of local authorities to act on reports of the abuse throughout most of that period.