The events of the Watergate coup continued to unfold. Eventually this was to succeed, putting the US deep state squarely into the hands of George H. W. Bush who had managed the coup.

In an atmosphere of increasing concern about CIA activities[citation needed] Director Richard Helms ordered the destruction of all documentation on the MK-Ultra projects.[1]

After the. The official narrative suggests that this came as a shock to everyone in the Western world, although William Engdahl has suggested that the event was planned by guests at the 1973 Bilderberg conference. This claim has been supported by James Corbett, but Will Banyan disputes this claim.[2] 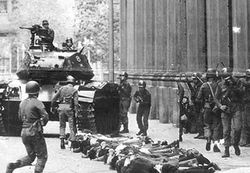 The US deep state toppled the democratically elected government of Salvador Allende, which promoted different values (it was Marxist) and endangered the profits of foreign businesses, such as mining companies.