The 2000s were a decade of gangster capitalism, both in US and abroad, as the long prepared narrative of the "global war on terror" on "Islamic terrorists" was finally rolled out. False flag attacks were carried out more commonly, in a variety of nations, and with a monotony of purported culprits:- the continual bogeyman was a group referred to as "Al Qaeda", supposedly under the control of erstwhile CIA ally, one Ossama bin Laden.

Peter Dale Scott developed the concept of the "deep event" in the mid 2000s, and in 2008 published an essay entitled The Assassinations of the 1960s as "Deep Events".[1] Exposes which were posted in an ad hoc fashion online began to be collated into larger sites.

The internet evolved from a specialist tool available only to a few computer experts and academics into a widely used medium of information exchange. Large tech giants were created and bought out, co-opted or otherwise brought under deep state control. The wall of secrecy which had surrounded the Bilderberg began to crumble as the little information which had formerly leaked out about the group was collated and published online. In 2000 Le Cercle published a single page website at atlanticcircle.com which was online for a couple of years.[2]

The potential of Wikipedia was quickly realised and it was professionalised and tied into the corporate controlled media. However, the diversity and number of information exchange systems meant that while the largest corporations were easily controlled, the long tail of the internet was free from effective oversight. Early adopters of emerging technologies such as Bit Torrent found themselves able to access unfiltered information, which put the more traditional old media in context. Intelligence agencies worked hard to realise its potential for mass surveillance.

The 2000s in USA were a decade of gangsterism by the cabal, which profited from the "terrorism" and "counter-terrorism" projects. The most dramatic example of the former were the attacks of September 11, 2001. The few billion dollars of profit which these yielded Larry Silverstein pale into relative insignificance alongside the "boom in private firms dedicated to the hyped-up threat of terrorism."[3] As this continued into the 2010s, a global public awareness would build of the use of false flag terrorism to subjugate populations, to the point where a 2017 survey suggested that the #1 anxiety of Americans is fear of "corruption of government officials".[4] 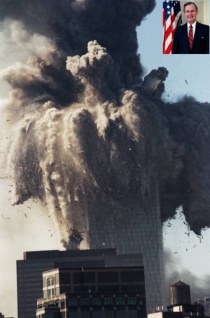 Many years in the planning, the events of September 11th, 2001 will be forgotten by few who lived through them. Insight into the truth behind the fiction can be gained from the response of the corporate media to 9/11. For years after the event, commercially-controlled media never replayed the collapse of WTC7, which was known only by very few. Even less known, and even more damning is was the fact that the media passed on multiple reports that the building would collapse even as early as 10:45 a.m. that morning. 97% of relatives accepted money from the 9-11/Compensation fund, which foreclosed potential legal action. The insider trading and other financial frauds of 9-11 is still little appreciated by many people; together with the existence of an E4B over Washington and hundreds of other inconsistencies have not been properly aired on corporate media.

Following 9-11, anthrax spores were mailed to US senators who were in opposition to the Patriot Act. The commercially-controlled media blamed these letters on Islamic terrorists, although the anthrax was quickly proved to have originated from a US military lab. After the most expensive investigation in the FBI's history, the official narrative blamed a "lone nut", Bruce Ivins, who had just purportedly committed suicide. Later Richard Lambert, the chief FBI investigator in the case, launched a legal case against the FBI, alleging that evidence which would have exonerated Ivins was deliberately covered up.[5]

Civil asset forfeiture continued to undermining faith in the US legal system, trebling between 2004 and 2008.

In March 2004, a set of train bombing in Madrid killed 191 people. In July 2005, 56 people were killed by 4 bombs set off in London. These, like the events of 9/11, were blamed by politicians and the commercially-controlled media on Al Qaeda. Like 9/11, multiple simultaneous drills were happening. As of 2017, neither has been the subject of proper legal proceedings, while both were quickly exploited to ratchet up the police state. in 2006, the UK ambassador to Saudi Arabia cited the London bombings to suppress the Serious Fraud Office's investigation into the Al-Yamamah arms deal, asking "if this caused another 7/7, how could we say our investigation is more important?".[6]

In the 2000s, awareness gradually grew that peak oil was an essential event about which corporate media had left the public almost completely uninformed, but which was clearly driving US foreign policy. This was heightened by the 2003 Iraq War, which was launched in spite of huge demonstrations worldwide (and after a deceitful propaganda campaign in which "intelligence and facts were being fixed around the policy").[7].