Lyndon Baines Johnson was a politician who became US President after the JFK Assassination. He put together the Warren Commission charged with investigating the assassination. Through his entire career, Johnson was the man of the Suite 8F Group, a deep state faction of Texas businessmen. 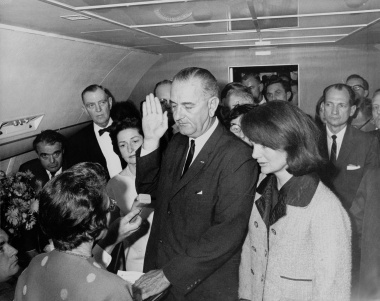 Lyndon Johnson's had a longtime mistress Madeleine Duncan Brown. She named LBJ as a key organiser of the JFK assassination[2][3], although her testimony is doubted by some, including JFK researcher Joan Mellen, who has stated that her evidence is unreliable and deceitful.[4]

"OK. Here’s what we did. We [were] within their 12-mile limit, and that’s a matter that hasn’t been settled. But there have been some covert operations in that area that we have been carrying on – blowing up some bridges and things of that kind, roads, and so forth. So I imagine they wanted to put a stop to it. So they come out there and fire and we respond immediately with five-inch guns from the destroyer and with planes overhead. And we cripple them up – knock one of them out and cripple the other two. And then we go right back where we were with that destroyer [the Maddox], and with another one [the Turner Joy], plus plenty of planes standing by. And that’s where we are now."
LBJ - 1964-08-03[5]

William Pepper quotes Colonel John Downey, LBJ's briefing officer during the Vietnam War as stating that LBJ stated that he couldn't stop the war in Vietnam because "my friends are making too much money".[6]

LBJ he used crass behavior to bend people to his will. At 6-ft., 3-in. tall and 210 lbs., he liked to lean over people, spitting, swearing, belching, or laughing in their faces. His favorite power ploy was dragging people into the bathroom with him—forcing them to continue their conversations with the president as he used the toilet.[7]

Seymour Hersh, in his memoir Reporter tells an anecdote from one of Hersh’s older colleagues, Tom Wicker. He recounted the reaction of LBJ to a highly critical story about Vietnam he wrote in late 1965, when the war was still highly popular with the American public. Right after it was published, Wicker was at LBJ’s Texas ranch with a bunch of other reporters when the whole press corps was told to be at a remote spot at a certain time.

Right after they arrived, a big Lincoln convertible came screaming up to them at top speed. The driver–Johnson–slammed the car to a halt and yelled for Wicker to climb in. "Tom got into the car and the two of them sped off down a dusty dirt road. No words were spoken. After a moment or two, Johnson once again slammed on the brakes, wheeling to a halt near a stand of trees. Leaving the motor running, he climbed out, walked a few dozen feet toward the trees, stopped, pulled down his pants, and defecated, in full view. The President wiped himself with leaves and grass, pulled up his pants, climbed into the car, turned in around, and sped back to the press gathering. Once there, again the brakes were slammed on, and Tom was motioned out. All of this was done without a word being spoken."[8]