From Wikispooks
< Orlando Letelier
Jump to navigation Jump to search

Orlando Letelier was killed by a car bomb at 9:30 a.m. on September 21, 1976, together with his assistant Ronni Moffitt in Embassy Row of Washington, D.C.. Moffitt's husband of 4 months, Michael was in the rear of the car and survived the attack.[1] The bombing was attributed to the Chilean secret police (the DINA). The involvement of the CIA was not initially widely understood.[citation needed] Jefferson Morley termed the Letelier assassination "the most significant terror attack in Washington until 9/11."[2]

The CIA knew of and/or ordered his murder, by car bomb, but the official narrative remains that "the assassination was perpetrated by agents of the Chilean secret police (the DINA), and was one among many carried out as part of Operation Condor." In 1995, Manuel Contreras was sentenced to 7 years for the assassination. 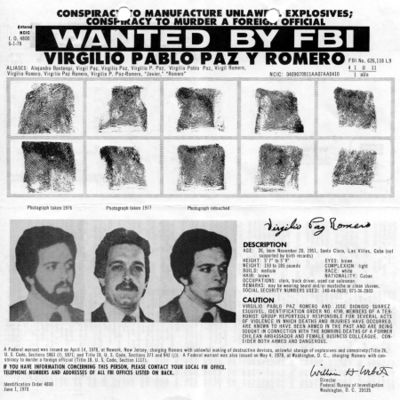 A 1978 wanted poster for Virgilio Paz Romero in connection with the murder. He later served 6 years after pleading guilty of Letelier's murder

An FBI investigation lead to the extradition of Michael Townley, a US expatriate who confessed that he had hired five anti-Castro Cuban exiles (from Operation 40?[citation needed]) to booby-trap Letelier's car. According to Jean-Guy Allard, after consultations with the Coordination of United Revolutionary Organizations (CORU) leadership, including Luis Posada Carriles and Orlando Bosch, those chosen to carry out the murder were Cuban-Americans José Dionisio Suárez, Virgilio Paz Romero, Alvin Ross Díaz, and brothers Guillermo and Ignacio Novo Sampoll. Suárez and Romero were not extradited.

Virgilio Paz Romero was later captured and pleaded guilty to the murder in 1991.

The CIA produced a report designed to misdirect and used their media sources, including Newsweek to disseminate it.[3]

"In a 21-page report to Congress on Sept. 18, 2000, the CIA officially acknowledged for the first time that the mastermind of the terrorist attack, Chilean intelligence chief Manuel Contreras, was a paid asset of the CIA. The CIA report was issued almost 24 years to the day after the murders of former Chilean diplomat Orlando Letelier and American co-worker Ronni Moffitt, who died on Sept. 21, 1976, when a remote-controlled bomb ripped apart Letelier’s car as they drove down Massachusetts Avenue, a stately section of Washington known as Embassy Row. In the report, the CIA also acknowledged publicly for the first time that it consulted Contreras in October 1976 about the Letelier assassination. The report added that the CIA was aware of the alleged Chilean government role in the murders and included that suspicion in an internal cable the same month."[4]