In 1974 Richard Nixon resigned, an important victory for the cabal, since the Watergate Coup was masterminded by George H. W. Bush. This success established his de facto leadership role of the group. 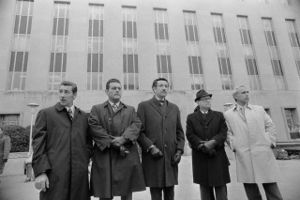 After the Watergate coup successfully unseated Richard Nixon, he was replaced by the Cabal's more compliant man, Gerald Ford. In October 1974, senator James Abourezk proposed an amendment to prohibit illegal CIA activity, but was overwhelmingly defeated.[citation needed] This, combined with the successful takeover of leadership of the Cabal by George H. W. Bush was to set the scene for Bush's later "massive criminal romp".