Alexander Vladimirovich Zakharchenko was a pro-Russian separatist leader who served as head of the Donetsk People's Republic (DPR) in eastern Ukraine. His election was called a "farce" by Kiev and illegitimate by the West, he took the oath to "honestly serve the interests of the DPR and conscientiously fulfil my duties".

At the inauguration ceremony, which took place in a drama theater in the separatist stronghold of the city of Donetsk, a senior separatist figure, Andrei Purgin, said: "We are starting a history with this inauguration and what happens today will be repeated. We are laying down the traditions of the Republic."[1]

UN Secretary-General Ban Ki-moon said on Tuesday the holding of separatist elections in eastern Ukraine at the weekend was "unfortunate and counter-productive". Pro-Russian rebels elected their own leadership on Sunday in a vote denounced by Kiev and the West, further deepening a standoff with Russia over the future of the former Soviet state.

Ban, addressing the Vienna-based Organisation for Security and Cooperation in Europe, said the situation in Ukraine remained a matter of deep concern. The 57-nation OSCE counts Russia, the United States and Ukraine among its members.

"The quote and unquote elections in the eastern part of the country this past Sunday are an unfortunate and counter-productive development," Ban said.[2]

Alexander Zakharchenko succeeded Alexander Borodai as Prime Minister on 7 August 2014,[3] and Borodai then reportedly became his Deputy Prime Minister.[4] He is a Ukrainian citizen born in Donetsk.[5]

According to Borodai (whom he referred to as "my friend") Zakharchenko is a "person from Donetsk"[6] and an "outspoken leader of a unit of independence supporters called Donbass People's Militia (Oplot)"[7] Zakharchenko was the leader of Oplot when on 24 July 2014 he was awarded the rank Major by Igor Girkin (known as "Strelkov"), after being wounded in the arm fighting the Ukrainian Army.[8][9] According to Girkin he was then (also) Deputy Interior Minister. On 16 May 2014 he had been appointed 'The military commandant of Donetsk'.[10] In September 2014, Zakharchenko was the lead negotiator for the DPR at the Minsk Protocol which agreed on a memorandum on a peace plan for the War in Donbass.[11] Zakharchenko won the Donbass 2014 Parliamentary Elections with 78.93% of the vote.[12]

In the campaign of the 2014 Donbass parliamentary elections, Zakharchenko was said to have told potential voters that he wanted pensions to be "higher than in Poland" and that pensioners should have enough money to "travel to Australia at least once a year to shoot a dozen kangaroos on Safari". According to Zakharchenko this was possible because "We’re like the United Arab Emirates. Our region is very rich. We have coal, metallurgy, natural gas ... The difference between us and the Emirates is they don’t have a war there and we do”.[13] Zakharchenko promised to build "a normal state, a good one, a just one. Our boys died for this, civilians are still being killed for this until now".[14]

More than 4,000 people have been killed in the conflict, which began after the overthrow of Ukraine's Moscow-backed leader, Viktor Yanukovych, in February. Ukraine and the West have accused Russia of sending weapons and soldiers to help the rebels, a charge Moscow denies.

A September 5 ceasefire agreed in the Belarusian capital Minsk brought an end to full-scale clashes, but sporadic shelling continues. Kiev argues the separatists broke the agreement by conducting the elections without central government's involvement. 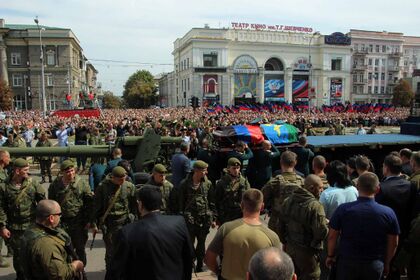 According to South Front, 120.000 people attended the funeral. 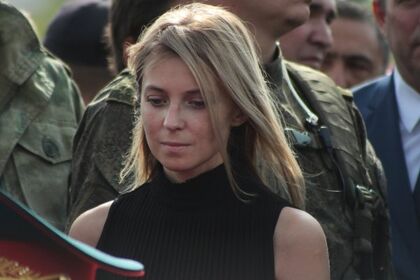 In attendance was Natalia Poklonskaya, Deputy of the State Duma at the time.[15]

Zakharchenko died from a directed explosive device placed at the entrance of the café "Separ" in Donetsk. French "counter-terrorism" expert Paul Barril commented on the method shortly thereafter:[16][17]

“I know who killed Alexander Zakharchenko in Donetsk. This was done by the 3rd Special Operations Regiment of the Defence Intelligence of Ukraine. Training was provided by US instructors at the Khmelnitsky Training Centre, one of their bases in Ukraine. [...] They hid a tiny smart bomb above the entrance in the lobby, undetected by sniffer dogs. When the leader walked in, the bomb was activated from a long distance and exploded. [...] The CIA and Green Berets have the world’s most advanced boobytraps, and the one in the “Separ” restaurant is a “signature” British or American job.”
Paul Barril [18]

In his book, The third Option, Theodore Shackley describes different methods to keep insurgencies of balance in different stages of their development.

“Keep hitting the insurgents in their base areas with small, elite anti guerilla units. Use booby traps.”
Theodore Shackley [19]