He did not mention Donald Trump by name but wove a thread of contrast through his speech. He denounced "lies told for power and for profit," said "there are truth and there are lies," acknowledged the bitter divisions in the country as an "uncivil war," and referred to the MAGA mob which rioted in the place he spoke just two weeks ago, saying: "Democracy prevailed."[1]

Joe Biden's son, Hunter Biden, and other family members are conduits for large amounts of slush money, of which Joe apparently takes half. In a leaked text message, Hunter wrote his daughter Naomi: “But I don’t receive any respect and that’s fine I guess.[..] It’s really hard, but don’t worry, unlike Pop (Joe Biden) I won’t make you give me half your salary.”[2]

As US vice-president, Biden contributed to the war propaganda against Libya and Syria[citation needed].

Joe Biden has repeatedly claimed that a Bill he wrote in 1994 was essentially the same as the 2001 Patriot Act.[12][13] "I drafted a terrorism bill after the Oklahoma City bombing," Biden said, "I introduced the terrorism bill in '94 that had a lot of these things in it."[14]

On September 11, 2001, Joe Biden gave an interview on ABC News, a week before the post-9/11 anthrax attacks took place, he mentioned anthrax. In this same interview, he repeatedly stated that the attacks may have an effect on US civil liberties. The anthrax attacks were subsequently used to pass the PATRIOT Act through congress:

During the wars in Yugoslavia, he campaigned for the arming of Bosnian Muslims and supported the action of Osama bin Laden’s Arab Legion as well as that of Saudi and Iranian troops[15]. With his friend Republican Senator John McCain, he pushed President Bill Clinton to intervene in Kosovo.

Senator Joe Biden, as Chairman of the Senate Foreign Relations Committee met with Pakistani General Mahmood Ahmed on the day after September 11, 2001. This is the same General Ahmed who transferred $100K to alleged 9/11 hijacker Mohammed Atta, as well as instructed Omar Saeed Sheikh.[16]

As part of his campaign promises, Biden said that as president he would require wearing face coverings in public mandatory in the US[17] .Michael Osterholm, a member of Biden's 12 person Covid advisor team, wants a U.S. lockdown of 4 to 6 weeks[18], a position denied by a Biden official as "not in line with the president-elect’s thinking.”[19]

In a 2019 fundraiser with rich donors, he promised "no one’s standard of living will change, nothing would fundamentally change." if he is elected. Talking to the New York (including Wall Street) crowd, he said “I mean, we may not want to demonize anybody who has made money". Biden went on to say that the rich should not be blamed for income inequality, pleading to the donors, “I need you very badly.”[20]

Biden is also a big supporter of the Hollywood-led ever expanding copyright racket. Kim Dotcom, founder of New Zealand based MEGA site, said “I do know from a credible source that it was Joe Biden, the best friend of former Senator and MPAA boss Chris Dodd, who ordered his former lawyer and now state attorney Neil MacBride to take Megaupload down"[25], after a meeting with Hollywood tycoons. The Motion Picture Association also spent money lobbying the office of Vice President Joe Biden.[26]

After winning a campaign a large percentage of the American voters believed[citation needed] was rigged in his favor, many analysts dismissed his physical and mental abilities and predicted that "Biden’s VP Pick Will Be President. Biden Is Just A Placeholder."[28] 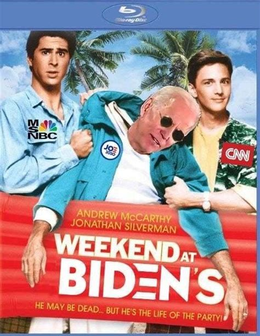 Biden survived two brain aneurysms in the late 1980s. The condition was later complicated by subsequent deep vein thrombosis and pulmonary embolism. After the second aneurysm was surgically repaired in May 1988, Biden's recuperation kept him away from the Senate for seven months.[29]

During a live TV debate during the 2020 campaign, Biden's left eye began to go dark red in colour and fill with blood. It is thought the cause of Biden's scare was a broken blood vessel in the eye, which can be caused by high blood pressure or straining.[30] Dr. Kevin O’Connor of the George Washington University released a medical summary,[31][32] at Biden's the request, in which he described Biden as a “healthy, vigorous, 77-year-old" - Biden being the oldest candidate ever. 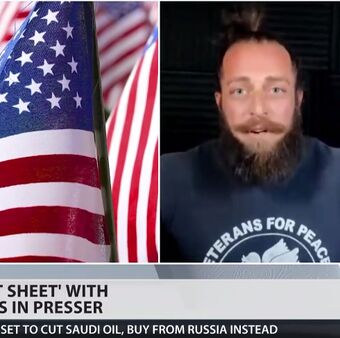 During the campaign, critics frequently pointed out Biden showing signs of cognitive decline, including an inability to hold on to his own train of thought, forgetting where he is and who he’s with, grossly incorrect use of language, and inappropriate behaviour[34]. Democrats scramble to defend this as "a stutter", while Trump nicknamed him 'Sleepy Joe'.

The problem appears to be worsening over time.[35][36] In the White House his microphone is cut after speeches when questions from reporters come up; whether directly, or when his answers go astray.[37] After reporting by the New York Post on the matter, which listed a few of these instances,[38][39] "fact-checkers" were brought in to debunk part of the claims along with a number of articles from other commercially-controlled media outlets. Some senators started to question who the person is that is in the position to cut the microphone of the president.[40][41][42][43][44]

His brother James joined a company called Hillstone International in 2010. At that point, Joe had been Vice President for two years. And as luck would have it, in 2011 Hillstone won the bid for a 1.5 billion project in Iraq. The company was supposed to build 100,000 apartments there. The project failed, practically nothing was built, but unfortunately the money was gone[45].

C-Span allows for users to create shorter clips of uploaded videos.[48][49] It appears that many videos that show Biden inappropriately touching children are getting deleted soon after creation in the 2020 election year.[50] The issue in general has also been part of mainstream news reporting since mid 2019,[51] after it was reported about in alternative media for years.[52] It came up again in September 2020 when Twitter flagged the footage as; "child sexual exploitation", despite originating from and being hosted at C-Span.[53]

By the end I thought, “These people won’t even lift a finger to stop him from touching their own innocent children. Why in the hell would anyone think they’d lift a finger to do a thing to help a stranger? Or strangers?”
Amy Sterling Casil (9 October 2020)  [54]

A Quote by Joe Biden