During the 2016 United States presidential election campaign, Donald Trump – who did not serve in the military himself and avoided the draft through a series of deferments – attacked John McCain's record of service and said the Vietnam veteran and former prisoner of war is "not a war hero" because he was captured: "I like people that weren't captured," Trump said.[2]

During the US/2008 Presidential election campaign, McCain (completely sober that is) started an eerie prose on Iran after a question in the audience to send a response to "Iranian hostile actions". in which he planned the idea in donors and voters their heads that Iran would give their nuclear weapons to "terrorist" organizations. How these individuals would deploy it for example was not touched. Perhaps a slip of things to come?[3]

His recordings as Tokyo Rose while he was prisoner of war for five and a half years in Vietnam were found and released in 2016.[4][5]

Following his comments in February 2017 that Donald Trump's administration was in "disarray", a video entitled "The truth about John McCain" was published on Facebook on 1 March. The video, which criticised McCain over his war record in Vietnam, the money he is said to receive from George Soros, the McCain Institute funded by Saudi Arabia and his association with the terror group ISIS, had been viewed 1.2 million times and shared by 28,715 users by 17 March 2017.[7] 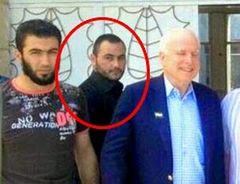 The New York Times has denied the identity of the man pictured left with John McCain, stating that "The [false] rumors are based partly on images of a Syrian fighter who resembles Mr. Baghdadi, seen in photographs with Mr. McCain".[8]

On live US television, during the 2008 presidential election campaign, Republican Party candidate John McCain referred to the JFK assassination as "the intervention". His exact words were: "... the way Barry Goldwater and Jack Kennedy agreed to do, before the intervention, the tragedy at Dallas" immediately followed by a hand to nose and look away from the audience gesture.[9]

In May 2018, CNN reported McCain did not want President Trump at his funeral.[10]