2016 saw an increase in attacks upon civilians in Europe and USA, ascribed to "Islamic terrorism". The run up to the US Presidential Election saw a large amount of emails from Hillary Clinton's private email server, which was understood to have contributed to the victory of Donald Trump. These emails led directly to the 'Pizzagate' citizens' investigation which alleged paedophilia in the US political establishment, and then to the introduction of the phrase "Fake news website", in a now infamous article published in the Washington Post, under the name of Craig Timberg.[1] Google also began extensive interference in search results, whichZach Vorhies exposed with a leak in 2019. 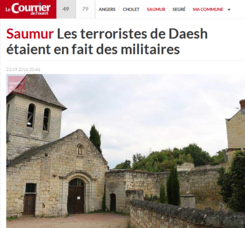 2016 saw several incidents of "terrorism", particularly in Europe. These included attacks in airports in Brussels and Istanbul, the 2016 Orlando nightclub shooting, the Nice truck event and the 2016 Munich shooting (the last two of which were filmed by Richard Gutjahr, who was present with his camera ready to roll at both events).

In September 2016, an apparent hideout was discovered, complete with arabic language newspapers and ISIS flags. This was later claimed to be part of a terrorism exercise, an explanation accepted without question by the commercially-controlled media.[2] Operation Gladio/B remains a third rail topic for corporate media, although the UK Daily Express did publish two articles around the 15th anniversary of 9-11 which questioned the US government's official narrative.[3][4]

A referendum on exiting the EU threw the UK conservative party into turmoil after a narrow and apparently unanticipated win for the "Brexit" camp. This was in spite of the last minute murder of anti-Brexit MP, Jo Cox, by a "lone nut", which didn't significantly change the outcome. This has prompted concern the UK may be the first of several members of the European Union whose citizens declare that they want to leave. 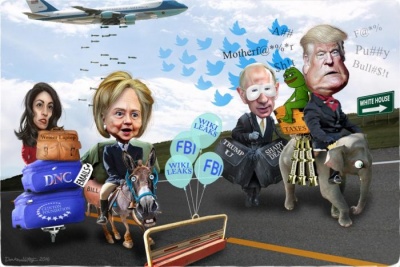 The 2016 United States presidential election inspired a lot of criticism of the process, and for many people came down to choosing the lesser evil between Donald Trump and Hillary Clinton. The revelations came thick and fast in the run up to polling day, including Hillary Clinton's Email debacle, which led to the exposure of the 7th floor group that the FBI termed a "shadow government".

In November 2016, an article by Craig Timberg was uncritical in its echoing of allegations made by PropOrNot, an anonymous website which listed over 200 websites (including Wikispooks) that echoed Russian Propaganda, even if unwittingly so. After widespread criticised online and threats of legal action by some of the websites named, the [Washington Post]] added a disclaimer to the article that it could not "vouch for the validity of PropOrNot's finding".[1]

One of the more extraordinary stories of the year - almost completely ignored by Western corporate media - was the 13 February 2016 emergency landing of a large cargo aircraft (Western Global Airlines N545JN) at the Zimbabwean capital, Harare. Blood stains on the side of the plane from a cargo door lead ground staff to discover 67 tonnes of mint condition South African banknotes and a dead body. After a few days of representations from the US embassy, the crew of 5 were released, together with the plane and its cargo. No charges were filed, and the commercially-controlled media did not report the incident in US or Europe.[5]

Project Censored reported in 2017 that 2016 had been a record year for internet shutdowns.[6]

The Knights of Malta experienced a period of turmoil beginning in December 2016, which the commercially-controlled media mostly avoided covering.[7] One article reported "treachery... greed, cover-ups, betrayal, corruption... blackmail... a successful coup" involving the highest levels of the Vatican, and a suspicious 120 million Swiss franc account rumoured to be of Nazi or other dirty money origin, and managed by its Geneva-based trustee Ariane Slinger whose name appeared in the Panama Papers.[8]