The presidency of Joe Biden began on January 20, 2021, when Biden was inaugurated as the 46th president of the United States.

Two days after becoming the projected winner of the 2020 election, Biden announced the formation of a task force to advise him on the COVID-19 pandemic during the transition, co-chaired by former surgeon general Vivek Murthy, former FDA commissioner David A. Kessler, and Yale University's Marcella Nunez-Smith.

On November 17, 2020, Biden announced that he had selected Mike Donilon as senior advisor and Steve Ricchetti as counselor. Jennifer O'Malley Dillon, who had been campaign manager for Biden's successful presidential campaign, was named as deputy chief of staff. 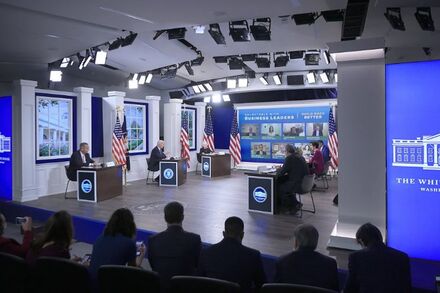 A studio built for official business instead of the White House,[1] with stack chairs and tables that seem to be too small, giving a rather odd appearance. Some say this is intentional.[2] (picture credit Getty Images)

President-elect Biden planned to announce his first nominees to the Cabinet before Thanksgiving 2020. On November 22, 2020, several news outlets reported that Biden had selected Antony Blinken to be secretary of state, Linda Thomas-Greenfield as ambassador to the United Nations, and Jake Sullivan as national security advisor.

On November 23, 2020, Biden announced Alejandro Mayorkas to be his choice for Secretary of Homeland Security and Avril Haines as Director of National Intelligence. Throughout December and January, Biden continued to select cabinet members, including Marty Walsh, the current mayor of Boston, as his Secretary of Labor.

Biden altered his cabinet structure, elevating the chair of the Council of Economic Advisers, director of the Office of Science and Technology Policy, and ambassador to the United Nations as cabinet-level positions. Biden removed the director of the Central Intelligence Agency from his official cabinet.

On February 25, 2021, President Biden ordered airstrikes on buildings in Syria that the Department of Defense said were used by "Iranian-backed" militias. The operation was the first known use of military force by the Biden administration.

Identity politics driven. There are people in the Admin who were solely appointed for being belonging to an "oppressed minority group".