Kurdistan is an historical region of the Middle East extending to Iran, Iraq, Syria and Turkey.[1]

Some Kurdish nationalist organisations seek to create an independent nation state consisting of some or all of these areas with a Kurdish majority, while others campaign for greater autonomy within the existing national boundaries.[5][6]

In January 2018, Turkish troops launched a ground invasion of Afrîn, a Kurdish enclave in Northern Syria/Rojava, to clear Turkey’s border of fighters who Ankara regards as terrorists posing a threat to its own territorial integrity.[7] Turkish officials said the ground invasion was being conducted in conjunction with Turkish-backed members of the Free Syrian Army (FSA) rebel group. Kurdish officials and residents in the Afrîn region reported heavy clashes on several fronts along the Turkish-Syrian border, with artillery fire and air strikes. The Turkish border towns of Reyhanli and Kilis were hit with retaliatory rocket fire, killing one person and injuring 32, according to Turkish media.[8]

Scottish Solidarity with Kurdistan (SSK) was quick to react:

“Turkey’s invasion of Afrîn shows what a farce NATO is. The YPG-led Syrian Democratic Forces (SDF) are not just the only serious secular, democratic force in Syria, they are a key ally of the UK and the US. Washington and London were more than happy to support the SDF when they alone took the fight to Daesh and liberated hundreds of thousands of people from their control but now they stand idle whilst another NATO member begins a vicious campaign to destroy the one group with a peaceful roadmap for Syria’s future.

"Let’s make no mistake, this invasion is motivated by the Turkish government’s obsessive hatred of the Kurdish people and their fear of an autonomous, Kurdish-led administration on their border. The international community must stand against Turkey’s invasion of Afrîn and make clear our solidarity with the democratic, feminist revolution taking place in Northern Syria/Rojava.”[9] 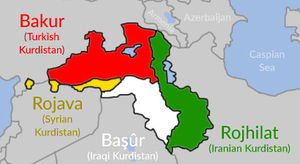