On February 26, a truck bomb at the World Trade Center killed 6 people, injured over 1000 and "created the necessary pretext for a massive engineering upgrade of the WTC complex. The purpose of the 1993 WTC bombing was not to bring down the WTC. A truck bomb could not bring down a structure as large as the WTC. The purpose of the 1993 WTC bombing was to create a rationale for a “security upgrade” of the WTC complex." Mark Gorton writes that the deeper purposes of that “security upgrade” (led by Brian Michael Jenkins for Kroll Inc.) were to emerge 8½ years later with the demolition of the three WTC towers on September 11, 2001.[1]

Deputy White House Counsel, Vince Foster, was found dead in Fort Marcy Park off the George Washington Parkway in Virginia, outside Washington, D.C., on July 20, 1993. It was officially ruled to be a suicide, but this verdict is widely disputed. 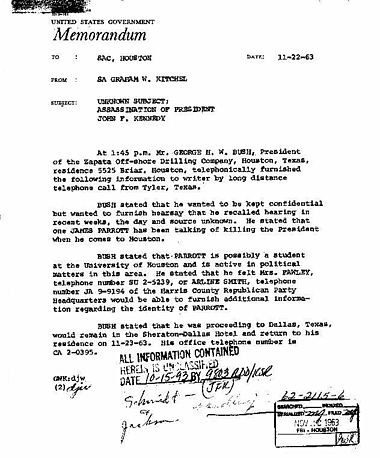 The November 1963 Parrott Memo was exposed, under Bill Clinton's presidency.