In 2010 the International Convention for the Protection of All Persons from Enforced Disappearance, a UN convention against forced disappearance became law in most of Europe and America. It was still unsigned by some nation states including US, UK, Canada, Russia and China.

After the failure of the Swine flu (H1N1) to capture the public imagination, The Good Club came up with Lock Step, a scenario which envisages use of a pandemic to enforce tighter top down government control in all (or almost all) countries, under cover of protecting public health. 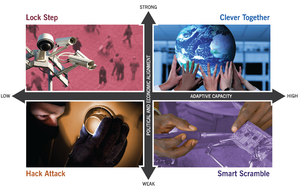 Lock Step is one of four scenarios in a paper produced for the Rockefeller Foundation in cooperation with the Global Business Network and released in May 2010. It envisages use of a pandemic to enforce tighter top down government control in all (or almost all) countries, under cover of protecting public health. It is summarised as "A world of tighter top-down government control and more authoritarian leadership, with limited innovation and growing citizen pushback".

After his home was fraudulently seized, he devoted himself to investigate how, following the leads up to Judge Joseph Golia. Two days after announcing "Now I've got enough evidence to put Golia in Jail" he was found dead with head injuries. The official narrative of his death has multiple contradictions, supported by documents. Large commercially-controlled media were uninterested. His story was told on the internet by friend Will Galison "The ultimate, terrifying moral of the Sunny Sheu story is this: If you are threatened with death by the police in the USA, there is no where you can go for protection, and after you are killed, there is no where your friends and loved ones can go for justice. That is why this story is of critical important to every American citizen."[2]