2015 continued the trend of increasing false flag "terrorist" attacks. These continue to receive support from commercially-controlled media which uncritically echoed the official narrative about "Muslim terrorists". The phrase "extremism" was increasingly used in conjunction with such activity.

In USA, life expectancy decline for the first time in many years, reportedly due to increases in drug overdoses.[1]

On 7 January 2015 an event happened in Paris, France in which the staff of the magazine Charlie Hebdo were shot and killed. The official narrative states that the attackers were Muslim terrorists, who were quickly detected because they left ID in a car. After the attack, the French government awarded itself new powers to close down free speech by carrying out internet censorship at will, effectively redefining "support of terrorism" as the expression of opinions at odds with government sanctioned truth.[2]

In February 2015, US Judge Rosemary M. Collyer ruled that the details of the Dallas occupy plot should remain secret.

April 2015 saw a legal action by Richard Lambert, the FBI veteran who lead the effort to solve the Amerithrax case. He filed a suit against the FBI, claiming that they were concealing evidence that could have cleared Bruce Ivins, who was posthumously charged with sending anthrax in the wake of 9/11.[3]

Corporate controlled media continued to uncritically swallow the official narrative on the "war on terror" and "Islamic terrorists", with no reporting on Operation Gladio/B, and continued to lose market share. Tired of repeated censorship of The Guardian's "Comment is Free" section, a group of readers started the independent site, OffGuardian. 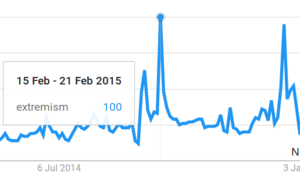 Google Trends reports a gradual increase in searches on the word "extremism", with peaks in 11-17 January (following Charlie Hebdo), 15-21 February and mid November (following the 2015-11 Paris attacks). Corporate media and governments appear to be increasing use of this word as a substitute for the word "terrorism".