Document:There is no future for Labour in bureaucratic centrism

With the events of last week still reverberating in Labour circles, in the rest of the country the pandemic still rages, we have returned to lockdown and the Tories have again socialised the wages of millions of people.

In the US the Democrats are edging towards a victory that many thought only days ago was a foregone conclusion, with razor-thin majorities in an election with an unprecedented turnout.

Whilst many in the media and party establishments are keen to turn back the clock to the bureaucratic centrism that once defined the battleground in middle England and the suburban US, there can be no going back.

This is not simply because progressives energised on both sides of the Atlantic, whether by Corbyn or Sanders, will not simply go back to shouting from the side lines, but because the challenges we face will define our politics.

The world we live in has changed almost beyond recognition from that we knew only a few short years ago. The global pandemic has rightly focused minds – but that aside we were facing automation, demographic ageing and, most importantly, the climate crisis.

It has become ever-more clear that timidly tinkering around the edges of capitalism cannot solve our problems. Where bland centrism was once able to deliver meagre advances, it can now barely stem the tide of defeat. 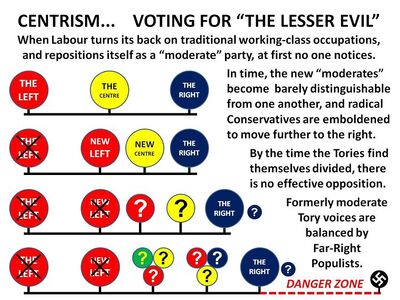 "Bland centrism can now barely stem the tide of defeat"

The working class outside of metropolitan areas are the new swing voters in modern politics. These communities on both sides of the Atlantic have been left behind by globalisation and the march of progress, seeing jobs dry up and the institutions that surrounded them close.

They have felt ignored and abandoned by the status quo – and have made increasingly alarming political choices in their desperate search for answers.

The reality is, whilst the status quo might be working for establishment politicians and journalists, it certainly isn’t for millions of hard-working families up and down the country.

Sadly it has been the right who have reacted to and capitalised on this, exploiting the deep-seated fears and desire for change to further the interests of those who have caused the situation.

All the while an authoritarian liberal elite looks down its nose at working class voters that the party that bears its name once represented.

If 2019 and the result of the British general election following Labour’s betrayal over Brexit wasn’t enough to prove this, then the US Presidential Election should be.

Having spent the past four years deriding Trump supporters and looking down their noses at anyone against their narrow band of bland status-quoism, many have looked aghast as the sitting President notches up the second-highest vote total for a presidential candidate in US history.

That the Democratic nominee Joe Biden has the highest and looks set to be the next president highlights a bitterly divided country.

These are no times for a retreat into timidity or “safe” politics. The world around us and the scale of the problems we face simply will not allow it.

We need to be radical in the face of the challenges ahead of us and certain that our solutions are the pragmatic course. The platforms on which we stood at the last two general elections contain policies fit for the times we live in and are popular with the public.

Over the last 40 years Labour has lost ground in the working class communities it was born in. A conscious decision to treat these areas as if they had “nowhere else to go” and a final sense of betrayal over Brexit has left us with trust to rebuild if we are ever to implement the policies we need to breathe life back into the communities we need to win.

Labour cannot afford to make the mistakes of the past if we are to ever win back the keys to Downing Street. We must start by acknowledging that yes, we need to win over new voters – but that we cannot do so simply by parking in our column those who voted for us last time. If anything has been proven in recent years, it is that there are other places for voters to go – and they’re willing to go there.

The publishing of the EHRC report last week[2] should have given everyone in the Labour movement cause to pause and reflect on our failures and if we are to rebuild trust across the country a blueprint for beginning this.

The decision to suspend Jeremy Corbyn did nothing to further this aim and I remain hopeful that he will be reinstated as a Labour member very soon so we can all get back to the task in hand.[3]

The lessons are there for anyone who wants to learn them. Treating held-back communities with contempt is unlikely to end well and without them we cannot change society. We must redouble our efforts to unite and win.