2008 in UK saw the launch of a campaign to promote the "war on terror". After criticisms that this was promoting paranoia and fear, it was shut down. An inquest into the death of Diana over a decade earlier that she had been "unlawfully killed".[1][2] In USA, the FBI quietly wrapped up its $100M cover-up operation of the 2001 Anthrax attacks, officially naming the just deceased Bruce Ivins as the "lone nut" perpetrator. In 2015 Richard Lambert, the chief FBI investigator in the case, launched legal action against the FBI, alleging legal malpractice.[3][4] 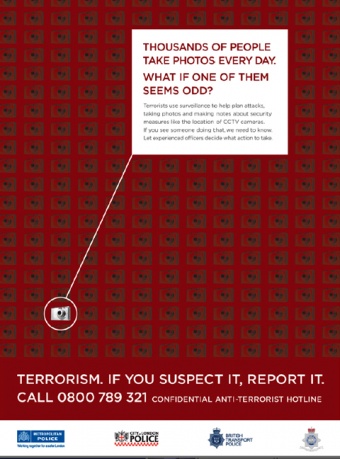 A real poster from the 2008 campaign

The UK police force launched a "Counter-Terrorism" campaign to promote the "war on terror". Activists subvertised by activists protesting its perceived fear-generating and racist accents.

Bruce Ivins was officially named as a "lone nut" who carried out the 2001 Anthrax attacks just after he was found dead. The FBI's Amerithrax "investigation" reportedly cost $100,000,000.[5] In 2015, its chief investigator, Richard Lambert, filed a lawsuit alleging malpractice, claiming amongst other things that the FBI suppressed evidence which would have definitely exonerated Ivins.[3][4]