From Wikispooks
(Redirected from Stakeholders)
Jump to navigation Jump to search

A stakeholder is a person or group who gets to give input into a decision-making process, but without actually making the decisions.

Stakeholder is originally a word from gambling, and refers to someone who has bet something, who has a share in the pot.

Noticeably lacking from the concept of stakeholders is any mention of democracy, and instead it focuses on technocratic terms such as "good management", "anti-corruption efforts" and similar. The concept is much beloved by think tanks and NGOs, as it gives the impression of people's participation (conveniently with the same NGOs an representatives), while in reality giving the decision-making power to their rich and powerful backers. Interestingly, the model also makes most smaller business leaders into shop managers for the owners of the world. 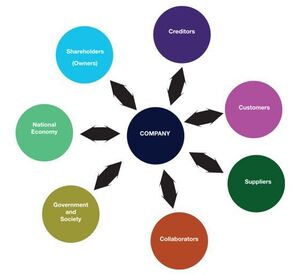 The core of what WEF stands for can be expressed in the composition of multi-stakeholder governance. Governance in this context does not mean government, but rule, leadership, domination. But it is not the governments that will rule, but the corporation with their multi-stakeholders.[1]