2013 was a year of increasing lawlessness by the US government. On July 17, 2013 an objection to the National Defense Authorization Act for Fiscal Year 2012 was struck down, giving the US government the legal right to detain anyone indefinitely without charge.[1] Philip Marshall was found dead as he was completing his 4th book about the events of September 11, 2001[2], while investigative journalist Michael Hastings died in a car crash in June after mentioning that he thought that his car was being tampered with.[3] However, Mark Gorton published Fifty Years of the Deep State, a highly recommended expose of the cabal which organised the JFK assassination and lies at the heart of the US Deep State to this day.

Google Trends reveals a spike in search interest in the term "hate speech" in January 2013 - of unknown origins. This term was to be frequently used by those seeking to legitimize internet censorship

An NSA contractor, Edward Snowden, leaked documents which revealed that mass surveillance was much more widespread than earlier realized. He confirmed the accounts of earlier whistleblowers such as William Binney and Russ Tice.

In 2013, the core mission of the FBI was changed quietly from law enforcement to "National Security". This reflects a wider shift away from explicitly defined, clear laws which are subject to review and challenge towards an opaque and deliberately ill-defined basis for the exercising of personal power.

The Boston Marathon bombings were followed by an unprecedented city wide lock down which lacked even a purported legal basis. This appears to have been a further step down the road of conditioning people to the US Police State logic of "we have more guns than you, do as we say". WhoWhatWhy has been active in challenging the US government's official narrative of the event.

50 years on from the JFK assassination, Mark Gorton published Fifty Years of the Deep State, an expose of the cabal which lies at the heart of the US Deep State. This was broadcast in 2014 by Unwelcome Guests.[4] 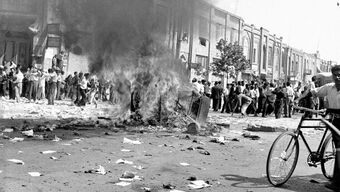 A 2013 declassified document was used to admit that the CIA was involved in the 1953 Iran coup d'état, ending 60 years of official silence on the topic.[5]