Dr Anthony Fauci is a US physician, immunologist and US Deep state actor who Josh Mitteldorf writes "aspires to be the high priest of epidemiology".[1] For over 35 years, he has headed the US National Institute of Allergy and Infectious Diseases. F. William Engdahl termed him "part of the Gates Foundation cabal" and noted that in "2012 Fauci was named one of the five Leadership Council of the Gates Foundation-created Global Vaccine Action Plan".[2] In 2020 he was made a lead member of the White House Coronavirus Task Force.

Fauci has aggressively pushed experimental drugs and vaccines but shunned established treatments with known safety profiles. In July 2020, Harvey Risch accused him of waging a "misinformation campaign" against hydroxychloroquine[4][5]. Later in 2020 the Front-Line COVID-19 Critical Care Alliance made a similar charge about ivermectin.[6]

Fauci attended two Jesuit schools (Regis High School / College of the Holy Cross) before getting his Doctor of Medicine from Cornell University.

The Institute for Scientific Information stated that from 1983 to 2002, "Fauci was the 13th most-cited scientist among the 2.5 to 3 million authors in all disciplines throughout the world who published articles in scientific journals".[7]

AIDS as a Personal Fief

The Fauci-led effort failed to cure HIV/AIDS, despite tens of billions of dollars going to his work over the decades.[8]

According to “Good Intentions,” a 1990 book by investigative author and innovation expert Bruce Nussbaum[9], Fauci started his career as “a lackluster scientist,” who “found his true vocation—empire building” when he took the reins at NIAID in 1984.

According to Nussbaum, to ensure that AIDS would be his exclusive fief within the federal government, Fauci “started the most important bureaucratic battle in the history of the fight against AIDS,” squeezing out more scientifically competent, but less conniving administrators. [10]

Having won a monopoly over AIDS within the federal government, Fauci, by training an immunologist who focuses on how the body fights infections itself, favored a vaccine approach in the fight against the then-terminal illness. This understandable professional bias came at the expense of research into the anti-retroviral drugs that ultimately reduced AIDS from a death sentence to a chronic disease in remission.

AIDS activist Larry Kramer called him a "pill-pushing tool of the medical establishment", writing in an 1988 open letter: "You admitted that you are an incompetent idiot. Over the past four years, $374 million has been allocated for AIDS treatment research. You were in charge of spending much of that money... Yet after three years you have established only a system of waste, chaos, and uselessness."[11]

Most of those guys up there on the top are just total administrative people and they don’t know anything about what’s going on with the bottom. You know, those guys have got an agenda, which is not what we would like them to have, being that we pay for them to take care of our health in some way...

They’ve got a personal kind of agenda. They make up their own rules as they go. They change them when they want to and a smugly like Tony Fauci does not mind going on television in front of the people, face out, and lie directly into the camera.”
Kary Mullis [12]

“After the 9/11 attacks, and the mysterious anthrax mailings that began a week later (which said, “TAKE PENACILIN [sic] NOW / DEATH TO AMERICA / DEATH TO ISRAEL / ALLAH IS GREAT”), the desire for biopreparedness became all consuming. Now there were emerging biothreats from humans as well as from the evolving natural world. Fauci’s anti-terror budget went from $53 million in 2001 to $1.7 billion in 2003.”
Nicholson Baker (4 January 2021)  [13]

In 2004, Fauci launched the $5.6 billion “Project Bioshield,” the National Institutes of Health’s biggest outlay for a single research issue until then.[14]

Fauci talked warmly of the fast-tracked H1N1 influenza (swine flu) vaccine on [YouTube]], reassuring viewers in 2009 that serious adverse events were "very, very, very rare."[15] Shortly thereafter, the vaccine went on to wreak havoc in multiple countries, increasing miscarriage risks[16] in pregnant women in the US, provoking a spike in adolescent narcolepsy in Scandinavia and causing febrile convulsions[17] in one in every 110 vaccinated children in Australia — prompting the latter to suspend[18] its influenza vaccination program in under-fives.[19]

“with all due modesty, I think I’m pretty effective. I certainly am energetic. And I think everybody thinks I’m doing more than an outstanding job.”
Anthony Fauci (July 2020)  [20]

Fauci is a member of the White House Coronavirus Task Force established in late January 2020 to deal with the coronavirus pandemic and a "de facto" public health spokesperson for the office of the President.[21]

In September 2021, The Intercept reported on revealed documents.[24]

"Not a major threat to the people of the United States"

Fauci in an interview with Newsmax on 21 January stated that the coronavirus was "not a major threat to the people of the United States".[25] About 80 percent of individuals who get infected spontaneously recover, he told the Senate Subcommittee on Health on March, 3. [26] 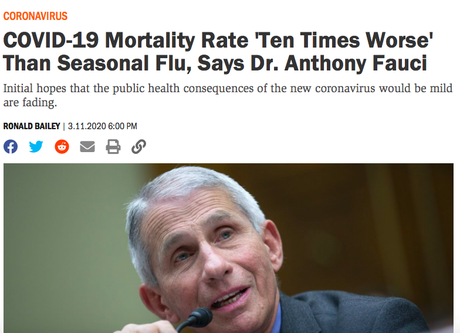 "You don't need to do anything different today than you did yesterday" he said on 25. February 2020.[27] A paper co-authored by him around the same time estimated that: "the overall clinical consequences of Covid-19 may ultimately be more akin to those of a severe seasonal influenza (which has a case fatality rate of approximately 0.1%)".[28][29] From 4. March on he calculated with numbers from Chinese authorities, which brought the mortality in his estimate to 2% and thus, made it more deadly than the seasonal flu.[30] The new stance of Fauci from 11. March on, one day after the Gates foundation announced a joint 125 million investment into COVID-19 Therapeutics Accelerator, is that Covid-19 is ten times as deadly as the seasonal flu.[31][32]

By mid-March, however, Fauci was aggressively promoting the US Covid Lockdown,[33][34] following the global COVID lockdown pattern.

In early April 2020 Fauci opposed the use of hydroxychloroquine (HCQ) or chloroquine as a provisional treatment for COVID-19 for severely sick patients[35] although the drugs showed promising results.[36] By contrast in 2013 he had favoured use of promising drugs in emergency rooms even when not backed by clinical studies.[37] In June 2020 journal including The Lancet had retracted papers about lack of evidence for HCQ, because, as Michel Chossudovsky whote Anthony Fauci’s Intent To Block HCQ on Behalf of Big Pharma.[38]

In late April 2020 Fauci spoke about remdesivir, a drug by Gilead Sciences, a company with whom he had dealings that F. William Engdahl termed "nefarious".[39] The drug had been given to a US COVID-19 patient in January 2020 and manufacturing started in China on February 12, although no study had confirmed its effectiveness.[40]. Citing a non-peer reviewed study[41] Fauci stated that "data shows that remdesivir has a clear-cut, significant, positive effect in diminishing the time to recovery".[42]

By April, Fauci was openly backing the COVID vaccine agenda:

“I feel confident that over a period of time we will get a good vaccine, that we will never have to get back to where we are right now.”
Anthony Fauci (8 April 2020)  [43]

On 16th April 2020, Fauci referenced 2019 as the pre-coronavirus era and stated that the "new normal" would be different:

“No matter what phase you're in there are certain fundamental things that we've done that are not like it was in September or October [2019], you want to call it the "new normal," you can call it whatever you want.”
Anthony Fauci (16 April 2020)  [44]

On July 7 2020, during a press conference, Fauci stated that it was a "false narrative to take comfort in a lower rate of death" for COVID-19 in the USA, claiming that "There's so many other things that are very dangerous and bad about this virus, don't get yourself into false complacency".[45]

Senator Rand Paul has referred Fauci to the US/DOJ for criminal charges.[46]

A Quote by Anthony Fauci