The Fourth Industrial Revolution (4IR or Industry 4.0) is the ongoing automation of traditional manufacturing and industrial practices, using modern smart technology, leading to a predicted large-scale redundancy of the general population.

There is a concerted establishment drive to implement as many aspects of this as possible, despite popular reluctance to many aspects (not that the population is asked anyway).

“Whereas in the past, humans had to struggle against exploitation, in the twenty-first century the really big struggle will be against irrelevance… Those who fail in the struggle against irrelevance would constitute a new ‘useless class’ – not from the viewpoint of their friends and family, but useless from the viewpoint of the economic and political system. And this useless class will be separated by an ever-growing gap from the ever more powerful elite.”
Yuval Harari [1]

In its most extreme form, the proponents envisage the end of the present human race, and the birth of a new race (transhumanism), in a fusion of technologies across the physical, digital and biological worlds.[2]

The concept is based on the idea that the world has lived through three previous industrial revolutions, the first between 1760 and 1820, from hand production methods to machines; the second between 1871 and 1914 that resulted from installations of extensive railroad and telegraph networks; the third was the Digital Revolution in the late 20th century. The phrase Fourth Industrial Revolution was first introduced by Klaus Schwab, executive chairman of the World Economic Forum, in a 2015 article, and became the theme of the 2016 WEF meeting in Davos, "Mastering the Fourth Industrial Revolution".

The World Economic Forum's the Great Reset is essentially a shock doctrine method to introduce the Fourth Industrial Revolution. 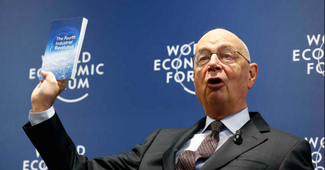 “It is our defining moment”, WEF leader Klaus Schwab writes, “Many things will change forever”. “A new world will emerge”. “The societal upheaval unleashed by COVID-19 will last for years, and possibly generations”..."Many of us are pondering when things will return to normal. The short response is: never.” [3]

“Consider the unlimited possibilities of having billions of people connected by mobile devices, giving rise to unprecedented processing power, storage capabilities and knowledge access. Or think about the staggering confluence of emerging technology breakthroughs, covering wide-ranging fields such as artificial intelligence (AI), robotics, the internet of things (IoT), autonomous vehicles, 3D printing, nanotechnology, biotechnology, materials science, energy storage and quantum computing, to name a few. Many of these innovations are in their infancy, but they are already reaching an inflection point in their development as they build on and amplify each other in a fusion of technologies across the physical, digital and biological worlds.”
Klaus Schwab [4]

The 20/80 society is a projected society of the 21st century. 20% of the population will be enough to keep the world economy going. The other 80% live on some form of welfare.[5]