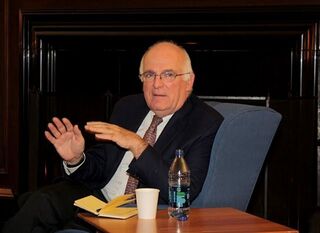 Britain's intelligence services are “assisting” US investigations into whether Covid-19 was “leaked” from a Chinese laboratory, according to anonymous security sources.

The Telegraph cited a “senior Whitehall security source” that British intelligence is helping the CIA and other services with the investigation ordered by US President Joe Biden. Britain has also joined with the US in demanding that the World Health Organization and the United Nations be tasked with investigating further.

The source told the right-wing newspaper this was necessary to “establish the truth”. It is nothing of the sort. As the WSWS explained, the Wuhan lab conspiracy theory is American capitalism's “big lie.”

Biden's announced investigation has brought the discredited conspiracy theory from the right-wing and fascistic fringes around former President Donald Trump, where it originated, to the mainstream of US and UK politics.

In defiance of overwhelming scientific evidence, the US political and media establishment is leading a furious propaganda campaign aimed at convincing working people that Covid-19 originated in a Chinese laboratory.

No evidence has been presented to back up this claim, other than a May 23 Wall Street Journal article citing unnamed “current and former officials,” claiming that researchers at the Wuhan Institute of Virology “went to hospital in November 2019,” with what appeared as “common seasonal illness”.[1]

With all the billions of dollars of funding and massive spying technology available, neither the CIA nor its British equivalent have produced anything more substantive. Yet the lab leak theory is now endlessly parroted by the Washington Post, New York Times and treated as good coin by virtually all the British media, including the nominal voice of British “liberalism”, The Guardian.

The haste with which the UK establishment has fallen in behind Washington recalls the illegal and criminal 2003 invasion of Iraq, which was similarly prepared by lies.

It is not accidental that the Wall Street Journal author, Michael R. Gordon, was the same man who, along with Judith Miller, wrote the September 8, 2002 article asserting Iraqi President Saddam Hussein was seeking to build a nuclear weapon. The claim was a lie, funnelled to the pair by the office of Republican Vice President Dick Cheney. But before it could be irrefutably discredited, it had served its purpose in politically legitimising the Iraq war and occupation that has killed over a million people.

Likewise, the main public “intelligence” proponent of the Wuhan lab conspiracy in Britain is former MI6 chief Sir Richard Dearlove. He first made the claim in a Telegraph podcast in June 2020, shortly after Trump's secretary of state, Mike Pompeo, said he had “enormous evidence” to back this up, before quickly backtracking.[2]

Dearlove told the Telegraph: “... a lot of data have probably been destroyed or made to disappear so it’s going to be difficult to prove definitely the case for a ‘gain-of-function chimera’ being the cause of the pandemic.”

There is no reason to take anything Dearlove says as truthful. He has a record of lying and fabricating “evidence” to suit a preconceived political agenda. It was Dearlove who—as MI6 head between 1999-2004—oversaw the intelligence disinformation campaign, including the notorious “dodgy dossiers” issued by the Labour government of Tony Blair to justify the US-led war.

Even the white-wash Chilcot Inquiry into the Iraq war was obliged to note Dearlove's dishonesty and the devastating consequences that followed.

It was Dearlove who claimed, in September 2002 that MI6 was on the verge of a “significant breakthrough” in proving Iraq had assembled “weapons of mass destruction”. A supposed new Iraqi source, said to have “phenomenal access” to Iraq's “biological and chemical weapons programme” would shortly deliver the goods, Dearlove claimed.

Through such claims, and similar fabrications—including the plagiarising of a PhD thesis—preparations for the US-led invasion on March 20, 2003 were set in motion. By this time Dearlove knew that the key “source” was a liar, with much of his claims having been apparently lifted from the film "The Rock". Dearlove kept this information back, and MI6 continued to issue briefs from the fantasist.

Chilcot rapped Dearlove for allowing information to be included in the dossier “without any supportive detail”. “Dearlove's personal intervention, and its urgency, gave added weight to a report that had not been properly evaluated and would have coloured the perception of ministers and senior officials. The report should have been treated with caution,” he concluded.

In other words, the MI6 chief’s concern was to produce political propaganda, not independent “intelligence” and, in doing so, he significantly contributed to an illegal war of aggression.

Only in July 2003—after the invasion—did MI6 officially withdraw the disinformation.

Yet The Guardian's senior social reporter, Martin Belam, who describes himself as “one of those very sceptical about the Wuhan lab leak theory initially”, linked to Dearlove's Wuhan claims, writing that the former spy chief “possibly knows his onions a bit better than me.”

Back in June 2020, even the Telegraph reported that Dearlove's assertion had been “described as 'spurious' by Whitehall sources” and dismissed by Downing Street.

What has caused this volte face is not the emergence of new information, or evidence. Rather, the geopolitical and class imperatives of the US and UK bourgeoisie have reached tipping point.

Biden's intelligence service order was issued the same day that Prime Minister Boris Johnson's former chief adviser, Dominic Cummings, gave evidence before a parliamentary committee in which he confirmed a government policy to allow tens of thousands to die from Covid-19.[3]

Speaking for his own factional purposes, Cummings confirmed that Johnson and his scientific advisers deliberately pursued a policy of “herd immunity” in which as many people as possible were to be infected with Covid-19, to the point of recommending replicating “chicken pox parties.”

He confirmed that Johnson had said, in October 2020, “No more f***ing lockdowns, let the bodies pile high in their thousands!”

Cummings even appeared to concur that one or more ministers could face corporate manslaughter charges. His testimony confirmed that herd immunity was the favoured policy of the bourgeoisie the world over, and most especially in the UK and the US where respectively more than 150,000 and 600,000 have officially died from Covid, and nearly 3.8 million worldwide.

Moreover, as new, more infectious variants emerge, capitalist governments are again insisting on a full reopening of the economy and an end to all infection-control measures, as they force workers into unsafe conditions to recoup their profits.

It is to divert attention from their actions that are responsible for deaths on a massive scale that the Wuhan lab claims are being revived. As many people demand explanations for why so many died and accountability from those responsible, the capitalist leaders are trying to cover the blood on their own hands by blaming China.

In this way, they also seek to deflect the immense social antagonisms that have been accelerated by the pandemic, and are reaching combustible proportions, outwards. This is in line with Biden's insistence that the US is at an “inflection point,” and that it must carry out a struggle to “win the 21st century” against China.

This imperialist warmongering agenda has no regard for the truth. Writing in the Telegraph on the impending “bifurcation between West and East”, columnist Jeremy Warner opined, “We are unlikely ever to know the truth about the origins of Covid, but since when did truth determine the course of history? The Wuhan lab leak narrative is one of those defining stories which encapsulates a whole raft of seething resentments and rivalries. A new, and more dangerous, era dawns.”[4]

The World Socialist Web Site calls on all workers, scientists and intellectuals to reject attempts by the ruling classes to stoke nationalist hatred and anti-Asian sentiment as part of their war drive. The real criminals are those sitting in the capitalist parliaments who conspired to expose the population to a deadly virus, and the corporate executives who profited from it.