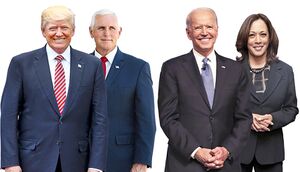 ★ Start a Discussion about this document
American Presidents

I have hardly blogged on the US Presidential elections for two reasons. Firstly the debate is so polarised that many people are oblivious to rational argument that moves outwith the few favoured memes of each side, and I have more than enough abuse in my life already. Secondly, it is some years since I spent any substantial length of time in the USA, and it is a country I find that I understand less and less. I prefer to blog about things where I bring not just judgement, but an extra store of knowledge.

I am very frequently chided for not posting on a subject; a number of people have approached me asking me to post on Nagorno-Karabakh, and indeed I have been offered money to post here on the subject, an offer I suspect would have turned out to be accompanied by conditions as to what I wrote. I will never accept such offers. I am not a corrupt shill like the highly respectable mainstream media journalists receiving secret UK government cash for propaganda from the Integrity Initiative. But also Nagorno-Karabakh is an ancient and tangled dispute with roots that lie deep in history, with complex modern consequences, and which would require a huge amount of reading before I was ready to take a considered view. It is part of a region of which I do in fact have a very deep knowledge, but on Nagorno-Karabakh not specific enough.

I think it is important not to become an all-purpose pundit who fires off unconsidered views on everything that occurs. Such pundits are two a penny in the mainstream media.

On the US election I showed my limitations with a tweet yesterday evening predicting Joe Biden would win fairly comfortably, and Trump would concede with good grace. I was wrong.[1]

I know that many of my readers will be triumphant at the departure of Trump. I can understand that. From the viewpoint of US domestic policy and particularly attitudes to social division, race and immigration, the end of Trump’s cynical manipulation of atavistic instinct among the electorate will be in itself a good thing. This has not been a healthy period in US politics.

But Trump has not been defeated by a Bernie Sanders; he has been defeated by a corrupt political hack backed to the hilt by the large majority of the billionaire owned media, financed out of Wall Street and with no intention of pursuing anything other than neoliberal economic policies. It is also the firm re-establishment of the rule of the security state and the military-industrial complex. Trump’s instinctive isolationism made him an enemy of the security state interest which spent a great deal of time in trying to undermine its President.

With Biden we will return to business as usual, and that means war and invasions. Under Trump we have had no new wars started, even if he continued old ones with little control. Without Trump, I have not the tiniest doubt that Syria would have been bombed back to the Stone Age, exactly like Libya, and millions more people would have been killed. Irrespective of the undoubted damage Trump has caused inside the United States across many fronts, Hillary would have killed a lot more people. Just not Americans.

I pause to note that the terrorist in Vienna had attempted to go as a jihadist to Syria and fight against Assad. If he had not been prevented from doing that, he would have been financed by the Saudis, fed and clothed by the Turks, armed by the CIA, trained by the SAS and given air support by the Israelis. He might even have got to be a TV star posing in a White Helmet, or employment artfully placing chlorine bottles on beds for pictures by Bellingcat. Unfortunately, having been prevented from joining the western sponsored insurgency, he ended up killing Austrians instead of Syrians and now is a “terrorist”, whereas jihadist killers of Syrians are “heroes”. A strange world. The Manchester Arena bomber was of course physically brought in to the UK by the British military after fighting for “our side” in Libya. You do indeed reap what you sow.

I hope that those who consider themselves of the left enjoy their relief when the electoral process finally puts to bed the extraordinary populism of Trumpism, and returns the USA to the smoother control of the regular media and political classes and their billionaire controllers. Because anybody who believes any more than that is happening is a fool. I said that I did not blog about the US elections because of the appalling partisan nature of debate. The truth is the system threw up, again, two truly obnoxious candidates entirely antithetical to the real interests of ordinary people in the USA. Biden will do nothing to tackle the appalling wealth and resource inequality which is the most startling problem the country faces. He will hopefully resolve social tensions in the short term. But the cause of those social tensions is a system of gross exploitation of the middle and working classes which is not sustainable in the long term, and which was the root of the Trump political eruption.

Kamala Harris was of course the most right wing possible Vice-Presidential pick. Her advance into power, despite being entirely rejected in the Democratic primaries, is in itself a huge condemnation of the system. I believe I am right in saying that Harris’s Primary campaign was so disastrous she managed to obtain zero delegates at all to the Democratic National Convention. Zero, None. Absolute bottom of the pile. Rejected by Democratic voters as the candidate in toto. Attempting to confirm this zero delegate fact, I just looked up the Wikipedia page on her primary campaign, which turns out to be the most entirely false, hagiographic and manicured Wikipedia page I have ever seen, on any subject, which is saying a lot.[2] Apparently her Presidential Primary bid was in fact a tour de force of brilliant debating and political strategy, recounted in enormous detail, not an abject failure resulting in no delegates.[3] The extraordinarily dishonest Wikipedia page is not perhaps in itself hugely important, but it is emblematic of the sinister manipulation behind the scenes of Kamala Harris’s rise to power.

Let us put a note in our collective diaries to look again in two years and see whether the USA has entered a period of renewed social progress, or just reinvigorated its position as a violent threat to the world. I am looking forward to the period when Biden’s mainstream cheerleaders have to find something positive to say rather than just respond “But Trump is evil”. I predict most of the responses below will say nothing much more on analysis than “But Trump is evil.” Knock yourselves out.