Frederick William Engdahl the is author of "A Century of War: Anglo-American Oil Politics in the New World Order" and "Seeds of Destruction". He was associated with the LaRouche movement[1][2] and publishes at williamengdahl.com.

Engdahl has written repeatedly that the 1973 Oil Price Shock was engineered at the 1973 Bilderberg, but he has been inconsistent in his claims about Henry Kissinger's attendance. Multiple declassified documents suggest that although invited, Kissinger declined to attend.[3] 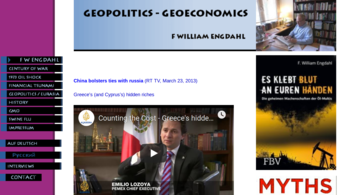