The Green New Deal (GND) is a proposed package of United States legislation that aims to address climate change and economic inequality.[1]

Inspired by President Franklin D. Roosevelt’s vast public works programmes that helped America recover from the Great Depression in the 1930s, the Green New Deal seeks to fight the climate crisis and tackle inequality simultaneously.[2] Like FDR’s New Deal, the GND is not a single project or piece of legislation. Instead it outlines the broad principles of a plan to achieve net-zero greenhouse gas emissions across the US economy by 2030.[3]

The basic principles of the Green New Deal were devised more than 10 years ago by a group of academics and activists in response to the 2008 Financial Crisis.[5]

A decade later, Democratic politicians Alexandria Ocasio-Cortez and Ed Markey revived the idea and introduced a Green New Deal resolution in US Congress in 2019. While the US Senate defeated a motion to take up the Green New Deal in March 2019, the proposal has become an animating force in politics and forced a discussion on the climate crisis.[6]

Other proposals for a Green New Deal have been made in the United States and internationally.[7]

In September 2019, Naomi Klein published "On Fire: The Burning Case for a Green New Deal" which is a collection of essays focusing on climate change and the urgent actions needed to preserve the planet. Klein relates her meeting with Greta Thunberg in the opening essay in which she discusses the entrance of young people into those speaking out for climate awareness and change.

Klein supports the Green New Deal throughout the book and in the final essay she discusses the US/2020 Presidential election saying:

"The stakes of the election are almost unbearably high. It’s why I wrote the book and decided to put it out now and why I’ll be doing whatever I can to help push people toward supporting a candidate with the most ambitious Green New Deal platform—so that they win the primaries and then the general."[8]

In 2019, US presidential hopeful Bernie Sanders proposed a comprehensive Green New Deal if he won the US/2020 Presidential election. He promised a ten-year, nationwide mobilisation centred around justice and equity during which climate change will be factored into virtually every area of policy, from immigration to trade to foreign policy and beyond. He would:

Successful Democrat nominee Joe Biden's climate plan is the boldest of any presidential candidate in history, but it doesn’t go as far as the ambitious proposals of Bernie Sanders.

"A Green New Deal" was a report released in the UK on 21 July 2008 and published by the New Economics Foundation, which outlines a series of policy proposals to tackle global warming, the financial crisis and peak oil.[11] The report called for the re-regulation of finance and taxation, and major government investment in renewable energy sources. Its full title is: "A Green New Deal: Joined-up policies to solve the triple crunch of the credit crisis, climate change and high oil prices".[12] 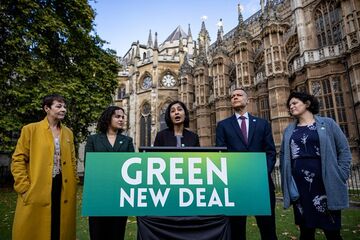 The Labour Party’s 2019 annual conference committed to implementing a Green New Deal, aiming to decarbonise the UK economy by 2030.

The idea for a GND first emerged in the wake of the financial crisis of 2008, when a group of economists and policymakers – including the MP Caroline Lucas, the economist Ann Pettifor and The Guardian’s economics editor Larry Elliott – advocated a decarbonising stimulus programme in response to the financial crash.[14]

However, the Labour Party's defeat in the UK/2019 General Election meant that its manifesto, which embraced many GND proposals, was not implemented.[15]

Larry Elliott wrote in 2020 that perhaps the policy might be first trialled "in one of the UK’s big cities – Manchester or Glasgow, say – to see whether a GND creates jobs, cuts emissions and generates a new wave of profitable environmental innovation".[16]

On continental Europe, the European Spring coalition campaigned under the banner of a "Green New Deal" for the 2019 EU elections. In December 2019, the newly elected European Commission under Ursula von der Leyen presented a set of policy proposals under the name European Green Deal. Compared to the United States plan, it has a less ambitious decarbonisation timeline, with an aim of carbon neutrality in 2050. The policy proposal involves every sector in the economy and the option of a border adjustment mechanism, a 'carbon tariff', is on the table to prevent carbon leakage from outside countries.

A pilot program for a four-day workweek, under development by Spain's Valencian Regional Government, has been described as a "helpful counter to ... fearmongering about the bleak, hamburger-free world climate activists are allegedly plotting to create with a Green New Deal."

In April 2020 the European Parliament called to include the European Green Deal in the recovery program from the COVID-19/Pandemic.

The current proposals have been criticised for falling short of the goal of ending fossil fuels, or being sufficient for a green recovery after the covid-19 pandemic. In its place, it has been proposed that the EU enacts a "Green New Deal for Europe", which includes more investment, and changes the legal regulation that enables global warming from coal, oil, and gas to continue.[17]

This page imported content from Wikipedia on 7 November 2020.
Wikipedia is not affiliated with Wikispooks.   Original page source here
Retrieved from "https://wikispooks.com/w/index.php?title=Green_New_Deal&oldid=227868"
Category: