Sir Keir Starmer is a UK politician and former Head of the Crown Prosecution Service and the Director of Public Prosecutions, where he was central in making sure the case against Julian Assange continued. He has been a Labour Party Member of Parliament since the 2015 General Election, and on 6 October 2016 he was appointed Shadow Brexit Secretary by Jeremy Corbyn[1]. Starmer soon became part of the effort to oust Corbyn as Labour leader.

Following years of successful legal work in the field of human rights, and after being named QC of the Year in 2007, Starmer was named as the new Head of the Crown Prosecution Service (CPS) and the Director of Public Prosecutions (DPP) in 2008.[5][6]

All of Keir Starmer's predecessors as DPP received knighthoods for the role, and he was no different. He was awarded a knighthood in 2014 for "services to law and criminal justice" and is therefore entitled to be known as "Sir Keir Starmer".[7]

In 2012, the Swedish prosecutor received an email from the CPS: “Don’t you dare get cold feet!!!” Other CPS emails were either deleted or redacted. Why? Keir Starmer needs to say why.[9]

Keir Starmer has also encountered criticism over the CPS’s decision to release the prolific serial rapist, John Worboys, from prison, as well as the decision not to pursue 75 further allegations made against him. However, in 2018, the CPS issued a statement claiming the Starmer had no role in either of the decisions regarding Worboys.[10]

Ian Tomlinson was brutally attacked by police officer Simon Harwood in 2009. Harwood hit Tomlinson, who was walking with his hands in his pockets in the other direction, across the back of the legs with a baton. Tomlinson was unable to break his fall, causing fatal internal bleeding to his liver shortly afterwards. Fifteen months later, Starmer announced that Harwood would not be prosecuted. The CPS proceeded a few months later when an inquest jury found that Tomlinson had been unlawfully killed.[11]

In 2011, Starmer was in court to witness the collapse of a trial of environmental activists after the involvement of undercover police officer Mark Kennedy was revealed. The case began the “Spycops” scandal, which has since exposed the extensive, long-term infiltration of left-wing and environmentalist groups by police agents, who grossly abused the rights of campaigners and perverted the course of justice in countless court cases. The CPS is suspected of having been closely involved.

As DPP, Starmer refused to pursue the matter. Referring to an in-house CPS investigation, he accepted the manifestly untrue: “If Sir Christopher Rose had found systemic problems, then I would quite accept perhaps a retrospective look at all the cases. But he didn’t, he found individual failings.”

In 2013, after Tory Chancellor George Osborne launched a gutter-press campaign against “benefits cheats,” Starmer issued guidelines for the CPS allowing those accused of improperly drawing social security to be charged under the Fraud Act. This allowed for sentences of up to 10 years. He also removed the financial threshold on sending cases to Crown Court, meaning even the most trivial “offences” could be punished with long-term jail time.[12] 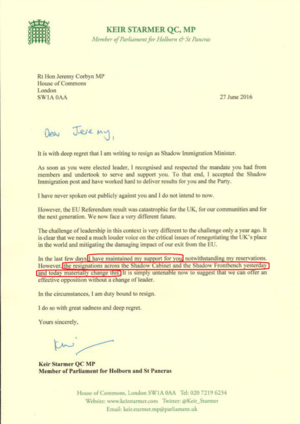 Moreover, at the UK/2019 General Election, the right thing to do – electorally speaking – would have been to continue to support the democratic decision of the British people regarding the Brexit vote. Labour’s decision to support a second referendum is clearly not the only reason for their loss, but it was certainly a huge factor in the sheer scale of it – and Starmer was crucial in pushing the party towards it.[13]