Rishi Sunak is a British Conservative Party politician who served as the Chancellor of the Exchequer from 13 February 2020[1] until he resigned on 5 July 2022.[2]

He was previously Chief Secretary to the Treasury from July 2019 to February 2020, and has been the Member of Parliament (MP) for Richmond (Yorks) since the UK/General election/2015.

Rishi Sunak and Liz Truss are the two remaining candidates in the 2022 Conservative Party leadership election. The result will be decided by a ballot of Conservative Party members, ending on 2 September 2022, and will be announced on 5 September.[3]

Born in Southampton, Hampshire to an Indian Punjabi family, Rishi Sunak's early education was head boy at Winchester College. Sunak subsequently studied Philosophy, Politics and Economics (PPE) at Lincoln College, Oxford, and later gained an MBA from Stanford Graduate School of Business as a Fulbright scholar. After graduating he worked for investment bank Goldman Sachs, and later as a partner at the hedge fund management firm the Children's Investment Fund Management.

In a televised debate during the UK/2019 General Election campaign, Labour's Rebecca Long-Bailey challenged Rishi Sunak, representing the Tories, when he said the last Labour government had crashed the economy:

“We suffered a world banking crisis: your Chancellor (Sajid Javid) was working at Deutsche Bank, selling the very derivatives that caused the crash in the first place."[4]

And she challenged his claims about the impact of Labour’s plans, retorting:

"Secondly, when you talk about reckless spending plans, I think you were referred to recently in the media talking about the figure of £1.2 trillion spends which is a fabricated lie that the Conservative Party have been perpetrating over the last few weeks. We're the only party with a credible and detailed costing plan, to outline our plans and I haven't seen any costings for your party whatsoever."[5] 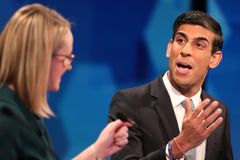 This page imported content from Wikipedia on 13 February 2020.
Wikipedia is not affiliated with Wikispooks.   Original page source here
Retrieved from "https://wikispooks.com/w/index.php?title=Rishi_Sunak&oldid=251079"
Categories: