The adjective transatlantic refers to the historic, cultural, political, economic and social relations between countries on both side of the Atlantic Ocean. In post-WW2 power terms, it particularly means the relationship between the the (dominant) United States and European countries or organizations, most prominently through NATO.

It is sometimes interchangeably used with the terms "the West", or "the First World","the international community" or "developed countries", in the old days, "civilized countries" or "white countries". Canada is integral a part, and even Australia, while Muslim Turkey has never been fully accepted.

After WW2, the United States created a multitude of initiatives to maintain control over Western Europe, by the State Department, the CIA and other, formally private, initiatives. 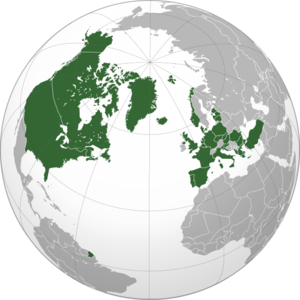 The North Atlantic Treaty Organization (NATO), founded 1949, is the main pillar in the transatlantic relationship. Nominally a partnership, it is dominated by its main sponsor, the United States. It has a European General Secretary, but the real power in NATO lies with the Supreme Allied Commander Europe (SACEUR),the commander of NATO's Allied Command Operations (ACO) and head of ACO's headquarters, Supreme Headquarters Allied Powers Europe (SHAPE).

By utilizing the European economic and military resources, it makes a U.S global power projection easier. As NATO Secretary General Jens Stoltenberg pointed out "A strong NATO is good for Europe and it's also good for the United States," he said. "The U.S. presence in Europe helps to protect Europe but it also helps the United States project power to the Middle East, to Africa."[1]

And as former NATO Secretary General Anders Fogh Rasmussen said, "NATO was a new type of partnership: unlike the shifting alliances of convenience, which had brought so much tragedy upon Europe, NATO was permanent. It was democratic.And it was transatlantic....North America and Europe will remain the world's strongest community of like-minded nations: democratic, outward-looking, and with a sense of global responsibility. No other community of nations can generate such a powerful positive momentum..In short, NATO was unlike any other alliance in the past.....NATO remains the institutional foundation for this community."[2]

The Atlantic Council (by far the strongest member of the Atlantic Treaty Association), is a nominally independent supporting think-tank for NATO. Its tentacles (shown by who are board members and experts) reaches into all aspects of media (Murdoch media,Reuters, entertainment (Hollywood, computer games..), politics, the economy and intelligence services, and is one of the leading organizers of transatlantic propaganda.

If politicians, journalists, CEOs or academics are heard to profess their faith in "transatlantic values" or the "international community", one can be sure that they are members of one or multiple transatlantic elite networks. To not be part, makes a successful career in any field significantly harder.

In the decade after WW2, the United States founded or financed a myriad of national and transnational conferences, foundations, fellowships, organizations, groups, networks, exchanges etc. In addition, extensive intelligence activities have been directed at strengthening this political ideology and pushing out competing ideas.

It is a trait of this effort that the general population is relatively unaware of the actual extent of this elite networking, it being either secret, private, or formally public but not highlighted, since central media personalities are part of this elite. So a governing elite with a core of maybe a few thousand people on both side of the Atlantic, who each participates in several seminars, gatherings, or are members of Foundations etc, where all participants invited are within a narrow band of acceptable ideas (military, economic), are busy among themselves creating and effectuating plans that don't reflect democratic wishes.

Particularly the new leadership in the occupied countries, Italy and Germany, were thoroughly joined to the transatlantic networks. For Germany, the most prominent of these was the Atlantik-Brücke, founded 1952.

The rest of Western Europe, made economically dependent through the Marshall Plan, the most prominent transatlantic network is the Bilderberg Conference, since 1954, but it is but by no means the only one.

The UK has, for example, the US/Canadian/British Ditchley Foundation conferences and the British-American Project, nominally an equal partnership, but dominated by the most powerful country.

The European unification movement was not seen as a power challenge, and was indeed in large parts sponsored by the United States.