Dr Judy Anne Mikovits is an American activist, author and former medical researcher who claims that flu vaccines promote the spread of COVID-19 and that American doctors are encouraged by the Centers for Disease Control and Prevention (CDC) to overcount coronavirus deaths across the US.[1][2] Dr Judy Markovits says the lockdown should be ended, the coronavirus vaccine program closed down, Deborah Birx and Robert Redfield fired from their jobs and, because Anthony Fauci authorised a $3.7 million grant to the Wuhan Institute of Virology biosafety level 4 laboratory to carry out gain of function studies, Fauci should be held criminally responsible for the COVID-19/Pandemic.[3] 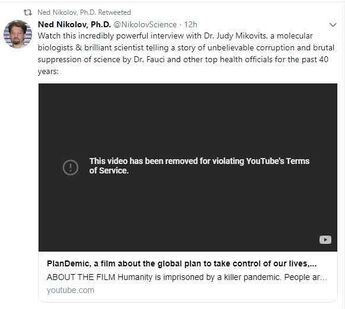 Judy Mikovits' trailer for Plandemic, in which she exposes Anthony Fauci, was removed from YouTube after a couple of days, but has spread to other sites such as AltCensored. The Washington Post reported on the 8 May that she "falsely claims that wealthy people intentionally spread the virus to increase vaccination rates and that wearing face masks is harmful."[4]

In April 2020, Judy Markovits published Plague of Corruption: Restoring Faith in the Promise of Science.[5] Michelle Malkin of the New York Times commented:

"Anthony Fauci, Bill Gates and Big Pharma don't want you to read this book. Get 'Plague of Corruption' now and learn the truth about public health industrial complex's decades of research fraud and vaccine cover-ups."[6]

In 1980, Mikovits was awarded a Bachelor of Science degree in Chemistry with a specialisation in biology at the University of Virginia. After graduation, she went to the National Cancer Institute at Fort Detrick, Maryland, where she developed purification methods for Interferon alpha. In 1986–1987, she started working at Upjohn Pharmaceuticals in Kalamazoo, Michigan, working to develop production methods to ensure biological materials manufactured using human blood products were free of contamination from HIV-1. In 1992 she completed a joint PhD program in Biochemistry and Molecular Biology at George Washington University.[7] Her PhD thesis was titled "Negative Regulation of HIV Expression in Monocytes." Mikovits was a postdoctoral scholar in molecular virology at the Laboratory of Genomic Diversity, National Cancer Institute, under Dr David Derse. She returned to Fort Detrick and worked with Francis "Frank" Ruscetti at the National Cancer Institute as a postdoctoral researcher and investigated retroviruses and their interactions with the immune system until 2005.[8]

Dr Judy Mikovits was appointed Research Director of the chronic fatigue syndrome (CFS) research organisation Whittemore Peterson Institute (WPI) in 2006 and led a research effort that reported in 2009 that a retrovirus known as xenotropic murine leukemia virus-related virus (XMRV) was associated with CFS and may have had a causal role.[9][10][11] However, the research came under fire, leading to her being fired by the WPI and an eventual retraction on 22 December 2011 by the journal Science.[12]

Dr Judy Mikovits and collaborators went on to participate, alongside two other research groups, in a larger 2012 study with 147 CFS patients and 146 controls. The study concluded that there was no evidence of XMRV or MLV infection in either group, a result that Mikovits said was "the definitive answer" on the issue.[13]

According to Snopes, Dr Judy Mikovits has become a champion for believers in medical conspiracy theories, basing claims linking the XMRV to autism and cancer on other retracted papers, and claiming she had been jailed by the influence of the Deep state and Big Pharma for exposing the truth about vaccines.

Mikovits has spoken at a number of anti-vaccination events[14][15] and has claimed that retroviruses have contaminated 30% of vaccines.[16]

This page imported content from Wikipedia on 6 May 2020.
Wikipedia is not affiliated with Wikispooks.   Original page source here
Retrieved from "https://wikispooks.com/w/index.php?title=Judy_Mikovits&oldid=193628"
Categories: